The complete report will be presented to the president and the public on Saturday. 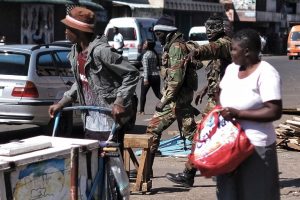 Two Zimbabwean soldiers wearing balaclavas shout orders to street vendors and money changers in the Copacabana market in Harare, on August 2, 2018.
Zimbabwe soldiers and police were on the streets of Harare on August 2 as authorities came under increasing pressure to release results of the presidential election after a deadly crackdown on protesters. Soldiers on a truck and on foot patrolled the streets of the market instructing vendors and passersby to leave. / AFP PHOTO / MARCO LONGARI

The commission of inquiry into the August 1 post-election deadly shootings in Harare by the military has today presented a summary of its findings to Zimbabwean President Emmerson Mnangagwa.

“Today, the commission presented to the President what we call an executive summary, while the complete report will be presented this Saturday,” commission spokesperson John Masuku said.

“In short, what I am saying is that, yes, the report is complete, but we have sent it to government printers for printing and binding and it shall be presented to the President and public this Saturday.”

The commission, chaired by former South African president Kgalema Motlanthe, made the presentation two days after wrapping up public hearings. The report is expected to be completed on November 31.

When Mnangagwa appointed the commission on August 29, he gave it a three-month timeline to report back to him.