The Zimbabwean authorities must ensure that the security forces exercise restraint and respect the rights of people protesting against massive fuel price hikes, Amnesty International said on the second day of the national ‘shutdown’. 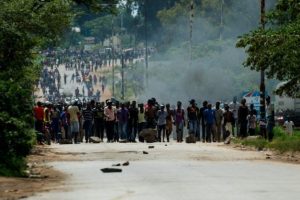 As a result of the crackdown, at least eight people have reportedly been killed by the security forces and 200 arbitrarily detained.

Reports of security forces using firearms and teargas against people protesting at the 150 per cent increase in fuel prices have surfaced in Harare and Bulawayo’s townships. In Epworth, one woman was badly injured after she was shot near a police station on her way to work, according to media reports. Another boy was shot in the stomach in Mbare.

“Years of political and economic mismanagement has brought Zimbabwe’s economy to its knees. Millions of Zimbabweans are terrified about the knock-on effects that the fuel increases will have on their daily lives, including for food and healthcare,” said Muleya Mwananyanda, Amnesty International’s Deputy Director for Southern Africa.

“The Zimbabwean authorities must ensure that people are able to express their views freely and safely, and must promptly investigate in an independent and impartial manner allegations of police shootings of protesters. The police must use force only when strictly necessary. Even then, they must exercise restraint at all times and use the lowest level of force needed. Firearms may only be used as a last resort, and when strictly unavoidable, to protect life.”

Amnesty International is also alarmed by the repressive measures the government has taken in response to the protests, including shutting down the internet to prevent people from supporting or organizing protests. The police and military have also reportedly subjected people who were protesting to beatings and other forms of ill-treatment.

On 13 January, the government spokesperson Nick Mangwana vowed to crack down on “elements bent on taking advantage of the current fuel shortages to cause and sponsor unrest and instability in the country”. Security forces have been deployed in large numbers on the streets of the main cities, including the capital Harare.

“The authorities must put an end to the practice of arbitrarily detaining people who were taking part in the protests. Those detained must be either charged promptly with a recognizable offence or else released,” said Muleya Mwananyanda.

The Zimbabwe Congress of Trade Unions (ZCTU), a local labour organization, called for a national shutdown, saying the fuel price increases were “insensitive and provocative”.

The government has also accused the organizers of the national shutdown and civil society organizations of being intent on destabilizing the country and working with ‘foreigners’ to achieve this aim. The authorities have since issued veiled threats against these unnamed ‘foreign’ organizers, including that they will revoke their visas and deporting them out of Zimbabwe.

“The organizers of the national shutdown are not a threat to anyone – all they have done is call for people to stay at home as a way to protest peacefully against the fuel increases,” said Muleya Mwanayanda.

“Instead of threatening those who criticize the government, the authorities should focus on addressing the root causes that are leading people to the streets and focus on building an inclusive economy for all Zimbabweans.”

There have also been reports of police stations being torched, shops looted, private property destroyed and the headquarters of the main opposition party, MDC, burned down.

On 12 January, President Emmerson Mnangagwa announced the fuel price hikes, which took effect on 13 January. The prices of both diesel and petrol, the main means for the transportation of people and consumer goods in Zimbabwe, have gone up by 150 per cent.

Zimbabwe has been suffering chronic shortages of US dollars, which were adopted as the official currency after the country abandoned the Zimbabwean dollar in 2009 due to hyperinflation. The country has suffered shortages of consumer goods in recent months, with some shops shutting their doors due to the shortage in US dollars.