Hopes that Emmerson Mnangagwa would govern with a lighter hand than his predecessor, Robert Mugabe, have been dashed by a crackdown on demonstrations.

HARARE, Zimbabwe — Maybe the scarf was just a scarf after all.

Soon after ousting Robert Mugabe from power, Emmerson Mnangagwa, Zimbabwe’s president, started wearing a colorful scarf wherever he went, on cold and hot days alike, as part of a broader makeover.

Sure, Mr. Mnangagwa had long served as Mr. Mugabe’s hatchet man and was known by the fearsome nickname the Crocodile. But the scarf, with the warm and fuzzy colors of the nation’s flag, appeared to signal a gentler leader and government. It became part of the political discourse and a trending topic on social media.

A little more than a year after Mr. Mugabe’s downfall, Mr. Mnangagwa is now showing his true colors, many Zimbabweans are saying. As demonstrators filled the streets of Harare, the capital, to protest the deteriorating economy, Mr. Mnangagwa reacted in the past week with the same authoritarian reflexes as his predecessor: deploying soldiers and the police to crack down on demonstrators — resulting in the deaths of as many as a dozen individuals — and shutting down the internet.

On Monday night, Mr. Mnangagwa, who had been on an official trip to Russia during the crackdown on protesters, returned to Zimbabwe after aborting a trip to Davos, Switzerland, where he had planned to promote the new Zimbabwe as being open for business.

“Violence or misconduct by our security forces is unacceptable and a betrayal of the new Zimbabwe,” he said on Twitter on Monday, promising an investigation into the violence and calling for a national dialogue with political, religious and other leaders.

The violence capped an unsuccessful yearlong effort by Mr. Mnangagwa and his ZANU-PF government to convince outsiders that the new Zimbabwe was fundamentally different from the old one. Initial hopes were dashed when government forces crushed protesters after elections in July, in which Mr. Mnangagwa was elected to a full term.

As the violence frightened away foreign investors and undermined the new government’s credibility before international lenders, Zimbabwe’s ailing economy deteriorated further. A 150 percent increase in gas prices set off the most recent round of protests and violence.

The Zimbabwe Human Rights Commission, a government organization established to protect human rights, said on Tuesday that at least eight people had been killed in this month’s protests — mostly the result of “live ammunition.” The commission added that the government had learned little from the violence that followed the voting in July, saying it was “disturbing” that it had again deployed soldiers to control street protests.

A coalition of civil society organizations said on Tuesday that 12 people had been killed in the protests and hundreds left with gunshot wounds, and that there had been serious violations of demonstrators’ rights. Government forces, the coalition added, had also responded by attacking civil society leaders.

The latest violence has led some Zimbabweans to compare Mr. Mnangagwa negatively to his predecessor.

“I used to think life would improve with the removal of Mugabe from power,” said Tinevimbo Mutasa, who was selling cigarettes, candy and ground nuts on a street in Harare’s central business district, her young daughter strapped to her back. “Mugabe used to unleash the violent police on protesters and now Mnangagwa is doing worse — releasing both police and soldiers on civilians each time they protest, and even shooting to kill.”

Kelvin Tinashe Choto, 22, a promising soccer player, was shot and killed during the recent protests, his family said. His father, Julius Choto, said he had discovered his son’s body at a mortuary.

“Tinashe was our future as a family, through whom we foresaw an improved life,” Mr. Choto said at his son’s funeral last weekend.

In November 2017, backed by generals, Mr. Mnangagwa staged a coup against Mr. Mugabe, ending his brutal 37-year rule over Zimbabwe. Mr. Mnangagwa had served for decades as Mr. Mugabe’s right-hand man and had led some of the fiercest attacks against political opponents.

Still, armed with his colorful scarf, Mr. Mnangagwa went on a charm offensive overseas, including at the World Economic Forum meeting in Davos last year. He found people receptive, especially the British, who were eager to move past the Mugabe era.

But there was one condition: Mr. Mnangagwa’s government had to hold a successful, free and fair election. Only then would Western governments endorse giving Zimbabwe the loans it desperately needed — which had been denied for nearly two decades after the violent seizure of white-owned farms in the early 2000s.

Things went well at first. Campaigning proceeded peacefully and fairly, as did voting on Election Day, according to domestic and international observers. But after the main opposition party, the Movement for Democratic Change, claimed that the voting had been rigged and it urged protesters to take to the streets, soldiers and police officers cracked down, killing half a dozen protesters.

“That was a major stain and gash in what was up to then a clean transition,” said Busisa Moyo, the former president of the Confederation of Zimbabwe Industries. “Foreign investors had been waiting for a clean election. We imagined we were trotting and we would be galloping after the election. But it hasn’t turned out that way.” 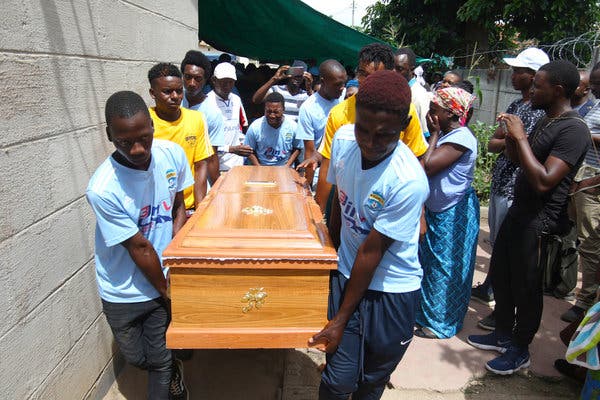 Soccer teammates of Kelvin Tinashe Choto, who was shot and killed during a demonstration, carrying his coffin during his funeral in Chitungwiza, outside Harare, last Saturday.CreditTsvangirayi Mukwazhi/Associated Press

Mr. Mnangagwa’s government found itself back where it had started.

“What did you expect from these guys — they were with Mugabe anyway? Same old, same old,” said Tendai Murisa, the executive director of the Sivio Institute, a private research group in Harare.

At the same time, Mr. Murisa said, expectations of Mr. Mnangagwa’s government had been so unrealistically high that both Zimbabweans and foreigners were destined to be disappointed.

“Zimbabwe was not given the chance to recover from the era of Mugabe,” he said.

With no new money coming into Zimbabwe, Mr. Mnangagwa’s government had to make painful and unpopular economic choices, including imposing a 2 percent tax on electronic money transfers.

In recent years, electronic transfers became the only way to make payments because of a long-running cash crisis. Zimbabwe uses the United States dollar as its main currency, but it also has a parallel currency called the bond note. Though the bond note is supposed to be equal to the dollar, its value has plummeted in recent months on the black market.

The widening gap between the dollar and the bond note made gas subsidies increasingly expensive for the government — resulting in the recent gas price increase.

“This readjustment had to be done — there’s no getting out of it,” said Ashok Shakravat, an economist and former adviser to the Office of the President and Cabinet. “It’s going to take some more time, maybe another year, and so we’re going to have some more difficult times ahead.”

“I have become used to sleeping in the fuel queues,” said Richard Nhari, who was 88th in a line of about 120 cars at a gas station in the business district last Friday. “My family now knows that at times Dad doesn’t come back home as he has to sleep over in queues to find fuel.”

On Monday night, after canceling his trip to Davos, Mr. Mnangagwa landed back in Harare where he was greeted by his deputies at the airport. He was wearing his trademark scarf.

The next day, Luke Msipa, a ZANU-PF Youth League member, said, “Mnangagwa, by wearing the scarf, he wants to show the world that he is different from former President Robert Mugabe.”

Jeffrey Moyo reported from Harare, and Norimitsu Onishi from Montreal.