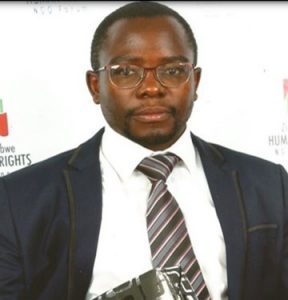 Answer: Thank you Brenna Matendere for this opportunity

Question:   How peaceful were the MDC Youth Before, during and after the July 30 2018 Elections?

Answer: The MDC Youth are always peaceful, disciplined and Human Rights oriented and they were very peaceful in their conduct before during and after the July 30 2018 Elections.

Question: During the campaign, MDC Youth Leader Happymore Chidziva was recorded at a rally in Gweru uttering the words “ Hokoyo Mnangagwa Hokoyo, Hokoyo ZEC Hokoyo” . The statement was contextually interpreted to mean encouragement of violence if the party lost the elections. What is your reaction in light of the 01 August violence?

Answer: The interpretation is not contextual at all. The statement had nothing to do with the encouragement of violence if the party lost the elections and has no nexus with the August 01 shooting of civilians by soldiers. The statement in question is actually not a direct quotation from our Chairperson Happymore Chidziva. What Chidziva said in Gweru at Mkoba stadium was that Mnangagwa and ZEC were warned against the habit of rigging and subverting the will of the people. The Youth Assembly’s point was that it was a waste of people’s time and national resources if Mnangagwa and ZEC were to conduct shameful and rigged elections as this was going to worsen the legitimacy and economic crisis in Zimbabwe which was a direct result of the previously rigged elections. As must be known, elections must not be rigged or predetermined but must be an expression of the will of the people. The warning was simply on the fact that if Mnangagwa and ZEC rigged elections, Zimbabwe would remain stuck in the legitimacy and economic crisis. The warning has come true as Zimbabwe is currently experiencing a legitimacy and economic crisis as a result of disputed elections.

Question: A witness told the enquiry into the 01 August shootings that MDC Youth Assembly has a unit called the Vanguard which possesses guns and is trained in military operations. What is your comment?

Question: Last month, when there was a wave of fire incidences that destroyed valuable property, Linda Masarira sensationally claimed that it could be the MDC Youth Assembly trained by Serbians in military operations . Is there truth in that and did the MDC send Youth for paramilitary training?

Answer:  Linda Masarira’s sensational claims are false and motivated by malice. No MDC Youth members have gone to Serbia for any training. Linda Masarira is not part of the MDC and has never been a member of the MDC. She has no knowledge of what MDC is made of. She is a person desperate to seek attention since she belongs to a political formation that has failed to attain relevance. Linda Masarira belongs to a political formation established for one sole purpose of opposing the MDC and the MDC Alliance brand and it is not surprising that she has made such malicious and false claims but I am convinced that no sane person would take her seriously.

Question: The MDC Youth have been blamed for instigating violence on top party officials ambitious to take control of high posts such as the Presidency at the influence of incumbents. Some of the victims are Elton Mangoma, Tendai Biti, Thokozani Khupe, Douglas Mwonzora and now Elias Mudzuri. What is your reaction to that?

Answer: The MDC Youth Assembly is a non-violent organ of the party. I am not aware of any one of the members of the Assembly who was involved in any violent activity. To the best of my knowledge, few of our members were falsely accused of having assaulted Elton Mangoma and they were acquitted in court after it was clear that the allegations were false. I am not aware of any violence alleged against our leader Tendai Biti and no such report is there against any member of the MDC Youth Assembly that I know of. Relating to our former Vice President Thokozani Khupe, her reasons for being expelled from the party related to her indiscipline and disregard of the Constitution of the Party as well as resolutions of the Party in relation to the establishment of the MDC Alliance as a brand for contesting 2018 elections. She is actually the one who attempted to resort to violence to capture our Bulawayo Party offices after realizing that her expulsion was imminent and she wanted to invade our offices. As for our Secretary General Douglas Mwonzora, he is actually our leader as the Youth Assembly and he is the administrator of the Party and I am not aware of any incident of violence against him. Actually, as a matter of fact, the best I know is that he was actually the legal practitioner of record for the members of the Youth Assembly who had been falsely accused by Mr Elton Mangoma. As relating to Vice President Elias Mudzuri, to the best of my knowledge, he is our leader as the one of the three Vice Presidents of the Party. I am not aware of any incident of violence against him by the Youth Assembly. We respect all our leaders and we do not believe in violence as a means and method of solving any differences with anyone, be it internally or externally.

Question: The old in the MDC and even outsiders feel they are being isolated by the talks such as Generational Renewal which your Assembly has been pushing lately. Help us understand the concept.

Answer: There is no such concept in the MDC Youth Assembly known as Generational Renewal. I am hearing it for the first time. The MDC Youth Assembly is part of the bigger MDC family which includes our Veterans, our Women’s Assembly and the whole family of the MDC and we work well and love everyone in the big tent.

Question: What is the MDC Youth Assembly’s position regarding Vice President Elias Mudzuri’s standing in the party after his attendance of a function presided over by President Mnangagwa at State House?  Your Secretary General posted a statement insinuating that he must be expelled from the party.

Answer: The MDC Youth Assembly is guided by the Party’s Constitution in relation to the status of any member of the party at any given time. As far as I am concerned, Vice President Mudzuri is still the Vice President of the Party until any decision is made to the contrary following due process. May it be clear that the Youth Assembly stands guided by the Party’s laws, processes and procedures in relation to the status of any individual member of the Party.

Question: During the hearing on the August 01st shootings, former Zanu PF Youth leaders Jim Kunaka and Shadreck Mashayamombe battered their party and seemed to be warming up to the MDC. Are they now members of the Party or the MDC Youth Assembly and have they been talks for them to join ship?

Answer: To the best of my knowledge, Jim Kunaka and Shadreck Mashayamombe are not members of the MDC Youth Assembly. They are however free to join the Party of Excellency if they so wish and in doing so there are processes to follow. In relation to them battering their party, I am of the different view. My opinion is that they had taken oaths, to tell the truth, and they were obliged to do so, which is what is expected from everyone after taking oaths.

Question: MDC Youth Assembly leader Happymore Chidziva Announced that there is no Christmas this year and young people would stage protests while having streets as their second homes. What really are the issues that the Youth are not happy about?

Answer: The young people are not happy about the terrible unemployment , high inflation , state capture by the mafia, stolen elections, scarcity of basic commodities , false economics of gedye-gedye bond note and the US dollar, corruption , violence , enforced disappearances , fuel shortages and the general deterioration of the standard of living of our people. Indeed, there is no Christmas this year as people cannot even afford to travel and to enjoy because of the failures of Zanu-Pf.

Question: So when will these protests start and how will they be coordinated?

Answer: Very soon and they will be coordinated peacefully.

Question: This year the MDC goes for Congress. What are the key resolutions the nation is likely to see coming from the Youth Assembly?

Answer: The MDC Youth Assembly’s focus is for the return of legitimacy to this country and we are moving with the motto that “ Let the vote count”. The aspiration of the Youth Assembly is to see a Zimbabwe where there is a legitimate government genuinely elected by the will of the people. We aspire to see a nation “ZIMBABWE” not just a country with physical boundaries. We want an end to illegitimacy.

Question: What is your assessment of the Government’s policies towards young people in Zimbabwe?

Answer: The Government is not serious with issues of young people,  and it has not taken young people seriously in terms of their participation and contribution towards governance and the economy. Young people have no access to land, wealth and means of production and are largely affected by unemployment caused by poor government policies.

Question: DO you see any hope of salvage under President Mnangagwa and his administration?

Answer: The Zanu Pf government is the staff and substance that nightmares are made of. It is a reality show of horror. There is nothing that we can expect from them as they have demonstrated in the last 38 years that they are experts in failure.

Question: What policy alternatives does the MDC Youth Assembly have for the purposes of turning around the lives of Young people?

Answer: Ending corruption, giving title deeds and access to land, the transformation of the mining and agricultural sector to be youth-friendly, transforming the commercial and industrial sector to be youth-oriented and focused, ending violence and exploitation of young people and also pushing for a quota system in governance and industrial activities for young people.

Question: Does the MDC Assembly have any alliances with other Youth Wings from the region and beyond for the purposes of policy dialogue and innovation?

Answer: Yes . We are a member of the International Union of Socialist Youths and we work and collaborate with all political formations in the region whose values converge with the social democratic values of the MDC.

Question: Going forward, what are some of the progressive programs the nation is likely to see coming from the MDC Youth Assembly?

Answer: The Youth is not a homogenous class but is diverse and it includes college students, school leavers, high school students , young professionals, young business people, young people with disabilities, young miners and many others ,therefore the programming is sector specific and what the MDC Youth Assembly is doing is to coordinate these clusters for a shared vision and agenda . The vision of the MDC Youth Assembly is to have all the difference clusters of the Youth to have a say in what Zimbabwe is supposed to be in their own way. The MDC Youth Assembly is the driver and coordinator of young people in Zimbabwe and listens to their needs and concerns and champions them.