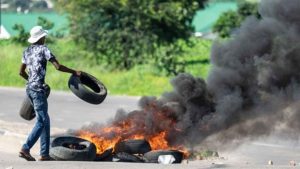 The Zimbabwe Human Rights NGO Forum on 14 January 2019 received reports of 79 human rights violations across the country during day 1 of the national stay away called for by the Zimbabwe Congress of Trade Unions (ZCTU) to protest the increase in fuel prices. This followed the pronouncement by President Mnangagwa of a more than 200% fuel price hike. The nationwide stay away is expected to last three days. The stay away began with relatively isolated reports of civil disobedience except for the barricading of major roads leading into the CBD. However, as the day progressed, the protests became violent. Motorists, commuter omnibus drivers and citizens not participating in the protests were attacked. There were incidents of destruction of property and looting. Retail shops, fuel stations, and police stations were targeted by angry protestors.

The Zimbabwe Republic Police (ZRP) responded to the escalating violence through opening live ammunition injuring over 20 people, disbursing water cannons, teargas and firing shots in the air. In Epworth, Chitungwiza and Glen Norah citizens were wounded, reportedly during the clash between the Police and protestors. There were reports of military personnel and police breaking into people’s homes and randomly beating dwellers in Chitungwiza.   In Kuwadzana, there was a reported incident of an unidentified man firing an AK47 assault rifle. This report captures reports documented on 14 January 2019 by the Zimbabwe Human Rights NGO Forum. Read the full report here.