A group of protesters have been demonstrating outside Zimbabwe's embassy in Pretoria, calling for South Africa to help stop the violence against protesters in the neighbouring country. 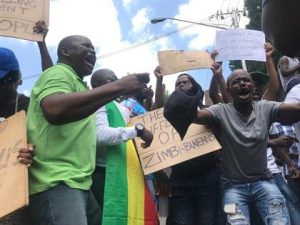 Brandishing a poster reading: “The untold suffering of Zimbabweans”, a group of around 100 protesters demonstrated outside Zimbabwe’s embassy in Pretoria on Wednesday morning.

The demonstrators gathered outside the embassy to protest over the treatment of their countrymen by the government, police and the army since the start of a widespread general strike on Monday.

The strike was sparked by the Zimbabwean government’s announcement last week of record petrol and diesel price hikes. Zimbabwe President Emmerson Mnangagwa flew to Russia on a state visit soon after the announcement was made. He is yet to return to the country.

At least five people have been killed in the protests since Monday.

People in Zimbabwe took to the streets in the main cities of Harare and Bulawayo to protest a massive fuel price hike announced by the government. #Zimbabwe #protest #fuel

On Tuesday, government ordered the total shutdown of all internet services.

A man protesting outside the embassy in Pretoria told News24 of the tough conditions his family was facing.

“I just spoke to my family. They are being held hostage in their homes. No one can go out to buy more food,” the man, who wanted to remain anonymous, said.

Call for action from AU, UN

Another man who spoke to News24 on condition of anonymity called on President Cyril Ramaphosa to intervene in the chaos.

“The whole of South Africa has turned a blind eye. They are saying Zimbabweans must solve their own problems. Mnangagwa must go. We want Mnangagwa to stop killing people,” said the man.

He also called for action from the African Union and United Nations to stop the ruling Zanu-PF party.

On Wednesday morning, the Department of International Relations and Cooperation (Dirco) said the government had “noted protest action in Zimbabwe” and was monitoring the situation.

“The South African Government has noted protest action in Zimbabwe & is monitoring the situation. Consultations are taking place between diplomats. we’re confident measures being taken by the Zimbabwean Government will resolve the situation” Ndivhuwo Mabaya @DIRCO_ZA spokesperson

Chesmail Jasi said he couldn’t just watch while the authorities “are killing our brothers”.