Zimbabwe has been rocked by protests over astronomical fuel hikes, inflation and the depreciation of the local currency. 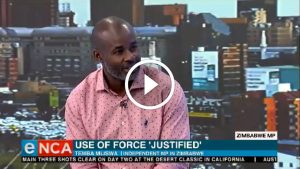 JOHANNESBURG – Norton Member of Parliament Temba Mliswa says Zimbabweans were ‘barbaric’ when they took to the streets this week.

Zimbabwe has been rocked by protests over astronomical fuel hikes, inflation and the depreciation of the local currency.

“To me it was totally unacceptable, the behaviour that we showed. We are very respected in terms of who we are, from a literate point of view, that was barbaric.”

“We were worse than baboons. I think we have a constitution in place which allows us to demonstrate peacefully and the current regime has allowed that to happen unlike the [Robert Mugabe] era, you could allow it to happen.”
He added that Zimbabwe was not in a crisis when there’s Brexit is happening and the US shutdown.

He said what Zimbabwe was experiencing was issues which are “part of processes of governancy.”