ZIMBABWE Republic Police (ZRP) officers on Tuesday 22 January 2019 raided and arrested 28 victims of state-sponsored brutality, who were receiving medical treatment at a medical facility in Harare. 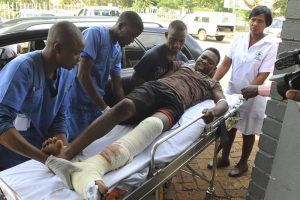 In this Thursday, Jan. 17, 2019 photo, an injured man is helped at a private hospital after an alleged assault by a group of uniformed soldiers in Harare, Zimbabwe. Zimbabwe on Friday faced a “total internet shutdown,” a media group said, after a days-long violent crackdown on people protesting a dramatic fuel price increase. Badly injured people streamed into a hospital in the capital after alleged assaults by security forces. (AP Photo/Tsvangirayi Mukwazhi)

ZRP officers pounced on the 28 Harare residents, who were receiving treatment after they sustained
injuries from assault by state security agents during anti-government protests held last week over the
country’s worsening economic crisis.

The law enforcement agents assaulted the residents as they arrested them before detaining them at Harare Central Police Station, where they are being represented by Kudzayi Kadzere and Bryant Elliot of
Zimbabwe Lawyers for Human Rights, who encountered challenges in accessing their clients at the police station.

In Chitungwiza, ZRP officers late on Monday 21 January 2019 pounced on Japhet Moyo, the SecretaryGeneral of the Zimbabwe Congress of Trade Unions (ZCTU) and arrested him after they had initially released him but confiscated his mobile phone handset following his arrest earlier in the day at Harare International Airport and detention at Harare Central Police Station, where they quizzed him over the shutdown protests held last week.

Moyo is represented by Bryant Elliot and Lizwe Jamela of ZLHR.

At Harare Magistrates Court, two Harare residents Daniel Shingirai and Shadreck Asani were expected
to appear in court on initial remand after they were arrested and charged with public violence for allegedly participating in last week’s anti-government protests.