HARARE - Zimbabwean doctors on Thursday ended a 40-day strike for better pay and conditions that crippled public hospitals without a deal on salary increases, their union said, but warned that members may not report for work days due to acute fuel shortages. 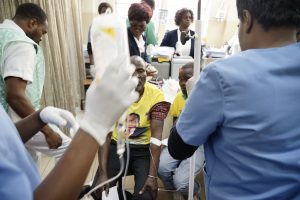 File: Junior doctors downed tools on December 1 complaining about lack of drugs in hospitals and to press for US dollar salaries.

The announcement by the Zimbabwe Hospital Doctors Association (ZHDA) came just hours before public sector unions were to meet the government, which is expected to table an offer to expand cost-of-living payments in an attempt to avert unrest.

Junior doctors downed tools on December 1 complaining about lack of drugs in hospitals and to press for US dollar salaries.

Teachers are also on strike, and other civil servants have threatened additional action.

ZHDA said President Emmerson Mnangagwa’s government had started delivering medicines and other sundries in state hospitals and made a written undertaking to hire more doctors and review salaries and allowances. There was no timeline given.

“Our members have begrudgingly resumed work with effect from today as the dialogue continues,” ZHDA said in a statement.

“Poor remuneration and the current fuel shortage remain a threat that may spontaneously hinder our members from reporting to work daily.”

The government is set to meet unions representing all civil servants later on Thursday where it will make an offer to expand cost-of-living payments, according to the Public Service Commission that employs them.