Forty-two years ago a priest and his two companions – one in his seventies, one in his teens - were killed. 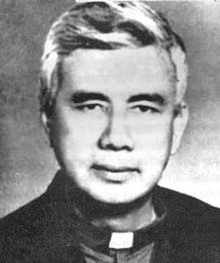 Twelve bullets, coming from all angles, hit Fr Rutilio Grande on 12 March 1977 as he was returning home to his village in El Paisnal, El Salvador.   It was the culmination of a life in which he had constantly sought to understand how, in his words, the gospel must ‘grow little feet’ in his land.

Born in 1928 into a poor family where his parents divorced when he was still very young, he was brought up to believe that suffering and poverty were unavoidable in this life and we should hope for happiness only in the next. But his coming to maturity coincided with the profound changes that shook the Catholic Church in the middle of the last century.

The Second Vatican Council was the climax of this change but even before it Rutilio was affected by the questioning of tradition sparked by the discovery of what the sources actually said – something often long buried by the weight of that tradition. One example was liturgy.  For centuries it was conducted in Latin, a language few understood, and so people who attended Church were virtually spectators at an event conducted by professionals, the clergy. The Lumen Vitae Institute in Louvain, Belgium, where Rutilio went to study in 1963, taught him the principle that liturgy is for everyone and all should participate as much as possible.

This may not sound a radical discovery but when he began to apply this principle more widely it became revolutionary.  The social and political conditions in El Salvador were oppressive and the majority were trapped in a system where a few, 1 per cent, of the people enjoyed power and wealth at the expense of the many.  The Church connived in this and, as mentioned already, taught people to suffer patiently and look forward to the life to come.

So Rutilio came to understand that the liturgy was only a mirror of what was happening in real life and the Council awakened his conscience to see that the role of the Church must now be different and she must become involved in the struggle for justice if she were to be an authentic and credible teacher of the faith.  The Latin American bishops met at Medellin in Colombia in 1968 and made their own the teaching of the Council.  From now on the Church was to be at the side of the poor – not out ahead of them or above them ‘in the clouds’ to use another phrase of Rutilio.

But how could this happen?  If Louvain, Rome and Medellin were all crucial influences on Rutilio there was a fourth and last.  In the early 1970s he went to Quito in Ecuador where he learnt the pedagogy of Paulo Freire.  In a word, this meant that the people themselves had to learn how to become agents of their own change.  They had to meet in their small communities and study the message of Jesus in the gospels.  What was the ‘good news’ that Jesus brought, not only to the woman at the well in the year 30, but to the campesinos of El Paisnal in El Salvador in the year 1975?

Rutilio integrated all the influences he had experienced into a coherent mission of ‘conscientization’ leading the people to discover their own power to change things peacefully; things did not have to be as they were.  It was not the will of God for them to be poor and to suffer.  Quite the opposite!  He wants us to have a dignified and joyful life here on earth as a way of preparing for the fullness of life that will follow later.

The rich and powerful landowners saw all this as a threat to their privileged life and they determined to get rid of this ‘troublesome priest’. They succeeded in killing him but their deed lit a fire in the heart of Oscar Romero and, even more significantly, Jorge Bergoglio, the future Pope Francis.  The eyes of Rutilio Grande and Oscar Romero were opened and they saw clearly what Jesus wanted them to do.  And they did it.

Something similar happened to Peter though he did not have the experience Louvain, Rome, Medellin and Quito.  He just saw a huge quantity of fish and he got the message.  He was so awed he burst out, ‘Leave me, Lord, for I am a sinful man.  For he and all who were with him were amazed’.