As it has become the norm in recent times, this past week was drama filled. From the ruling party elders’ gathering in Serowe where amongst other things the President Mokgweetsi Masisi was called setete (cry baby), to screams of tribalism, to fake resurrection by a Congolese fire church pastor, up to Zimbabwe, where we learnt we are throwing billions of Pula into the pit hole of Emmerson Mnangagwa, even handing him bags full of our tasty Tsabana. 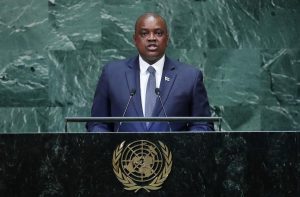 The P2.1 million humanitarian donation, which beyond babies’ nutrition food included medical utilities such as bandages, blood transfusion kits and disposable syringes, is a gesture which if done in a transparent manner will have most of us, nodding in total agreement, and even offering our share of the monthly children’s rations. Batswana, are giving by nature, hence the Setswana saying bana ba motho ba kgaogana tlhogo ya ntsi.

This means however little you have, family will always share. Again, Batswana are known to be neighbourly. Zimbabwe, once the breadbasket of southern Africa, has been in dire straits for decades now, mainly due to misrule because of political instability, mismanagement of resources, and at most times the collapse of the economy. We have lived with our neighbours in our homes, ordinary Batswana families, companies and even government, employing Zimbabwean economic exiles, thus ensuring the sustenance and development of the neighbours’ economy. This is living by the adage of matlo gosha mabapi, whereby when a neighbour’s house is on fire so is yours. This means that unless you help put out the fire at the neighbour’s house, yours is next.

So when our government lends a helping hand, even in far off developed places such as Japan, which when it was hit by a devastating earthquake, the Ian Khama administration acted humanely and send food stuff, we have to nod in agreement. Botswana has in the past, stepped forward in military rescue missions, in places such as Mozambique and Somalia.

And it is not the first time we have aided our northern neighbour Zimbabwe. Even at the height of personal tension, the former president, Khama and Zimbabwe’s Robert Mugabe had always done some deals, to the extent of Botswana giving Zimbabwe cattle from Foot and Mouth Disease prone Zone 6 region, for next to nothing, if not free. Moreover, in 2017, the Ministry of Agriculture donated over 400, 000 vaccines to help fight FMD in Zimbabwe. This was to ensure that the disease, which is high especially along the Botswana/Zimbabwe borders is contained, so as not to killed lucrative beef market.

It was not the first time. Just when Khama came to office, in 2008, Botswana government donated P3 million through the World Health Organisation, UNICEF and World Food Programme to Zimbabwe, with the ministry of international relations emphasising the funds were for “the people of Zimbabwe” not the Mugabe administration.

So it is therefore, not shocking that Botswana, through this past week’s heads of state led

commission, has come to Zimbabwe’s aid. As already alluded to, is what Minister Bogolo Kenewendo described as business-to-business financial aid. The rescue package, counted in the billions of Pula, to Zimbabwe’s private sector had many Batswana confused, especially since the Zimbabwean minister, on the same news item on Btv, spoke of a loan by the Botswana government. While seemly speaking in parallel lines, they however admitted the deal is under discussion.  What got many worried was our minister’s assertion that the peer business transaction will be guaranteed by the Botswana government.  Strangely, immediately after the news item from Harare, Btv read a statement from the Office of the President disputing the deal.

Okay, the confusing statements aside, financial aid to Zimbabwe is worrisome. Not that we don’t trust the Mnangagwa administration. Not many people will be convinced that if the money is released, from whatever end, will not end up oiling pockets of the corrupt political leadership. Yes, it is new man at the helm, but it still the same ZanuPF government. Moreover, the Masisi administration needs to be transparent, and tell the nation whether the previous loans have been settled. A bad debtor is blacklisted, not honoured with more money.

More importantly, we need to be sure who the deal will benefit. We have to do due diligence, to ensure that we are not funding businesses owned, or with shareholding by political figures. That matters, because ours is a dirty world. Also, what is in it for Botswana? Remember this is not charity, it is business.

It is at this juncture that we have to encourage our one, hard-nosed institution, the media, to keep tabs on the deal.

Still on the digging, I asked a question on my Facebook page as to who produces Tsabana, and the answers Batswana provided were interesting. It was not to say there was anything wrong in donating that particular product.

It is not, if anything, Tsabana is nutritious and enjoyed by all, not just babies. What Rre Masisi though needs to come clean on, is what the taxpayer paid, to which company owned by who, or who amongst our political elite have shares in it. Also has the company, as alleged, given financial aid to the BDP or faction within? Moreover, are we going to tease Zimbabwean children with the product, or are we going to be forced to continue donating, or even selling it to our neighbours? Ours is a transparent, consultative government, isn’t it?