Many aid groups are still assessing the damage and devising logistics to reach the most heavily affected areas, but here are some international and African organizations that are leading relief efforts. 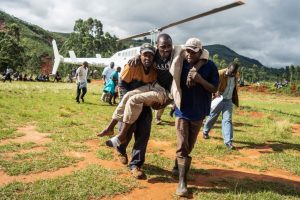 A wounded survivor is evacuated by helicopter from Chimanimani on March 19, 2019 to an hospital in Mutare, after the area was hit by the Cyclone Idai. – More than a thousand people are feared to have died in Mozambique alone while scores have been killed and more than 200 are missing in neighbouring Zimbabwe following the deadliest cyclone to hit southern Africa. Cyclone Idai tore into the centre of Mozambique on March 14 night before barreling on to neighbouring Zimbabwe, bringing flash floods and ferocious winds, and washing away roads and houses. (Photo by ZINYANGE AUNTONY / AFP) (Photo credit should read ZINYANGE AUNTONY/AFP/Getty Images)

Cyclone Idai has triggered massive floods, displaced thousands in Mozambique, Malawi and Zimbabwe, and killed more than 200 people so far — a toll that could eventually surpass 1,000, Mozambique President Filipe Nyusi said on Monday.

The storm has nearly obliterated Mozambique’s fourth largest city, devastating 90 percent of Beira, according to the International Federation of Red Cross and Red Crescent Societies. Heavy rains, expected to continue through Thursday, could further exacerbate flooding and complicate relief efforts.

Many aid groups are still assessing the damage and devising logistics to reach the most heavily affected areas, but here are some international and African organizations that are leading relief efforts.

Humanity and Inclusion have been working in Mozambique since 1986, helping disable landmines and tackling other issues stemming from the country’s 25-year civil war. The organization has 40 people working on the ground in Mozambique, helping clear roads and giving special attention to people with disabilities. You can read more about their work and donate here.

Save the Children is working closely with the Mozambique government and other aid organizations to support children impacted by the disaster. An aerial assessment shows that major flooding is imminent in the town of Buzi, home to approximately 2,500 children.

The Association for the Children of Mozambique is a Mozambique-based charity founded by Swiss national Barbara Hoffman.The organization provides support to orphans and runs schools in the country.

The UN’s International Disaster Relief System fund would support efforts to provide aid to more than 400,000 people. UNICEF is also on the ground helping children and families. You can make tax-deductible donation to their relief fund here.

Gift of the Givers is an African disaster relief organization that is leading flood response in Malawi. You can contribute to their efforts here.

Doctors Without Borders is working to provide medical support and water sanitation in Mozambique, ZImbabwe and Malawi. You can make a general donation to their efforts here.

CARE, a nonprofit that focuses on women and girls, is providing seeds and livestock. They are also working with other aid organizations to give out tools for water purification, as well as hygiene products and emergency latrines.

We verified organizations to the best of our ability. If you aren’t sure about the legitimacy of a charitable organization, visit Charity Navigator.