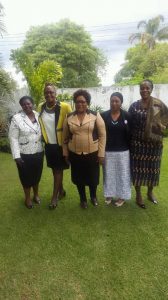 The Forum and ZWLA celebrate the vast achievements in women empowerment and take a moment to reflect on the future strides required in realising gender equality. The United Nations Women’s theme for 2019 International Women’s Day is – Think equal, build smart, innovate for change.

In keeping with this theme, the Forum and ZWLA applaud the women human rights defenders who have innovated for change in advocating human rights, gender equality and inclusive policies that bring development.

Gender equality is one of the national founding values and principles in our Constitution (Section 3 (g)). Section 17 identifies gender balance as one of our national objectives which the state is obliged to fulfil.   In the bill of rights, section 80 is fully dedicated to guaranteeing the rights of women doing away with any traditions or taboos that customarily would otherwise be used to stifle the rights of the women.

The Forum notes that besides these progressive provisions in our national law, structural and administrative barriers continue to hinder progress towards gender balance even the apex level of government. The government has consistently failed to satisfy the gender balance requirements of section 17 of the constitution as only a few women are represented in decision making positions.

Zimbabwe’s human rights policy when it comes to protection of women’s rights has been a disaster as evidenced by the continued incapacitation of the Zimbabwe Gender Commission, a crucial institution in the protection of the rights of women.

The Forum welcomes the report presented at the 40th session of the Human Rights Council by the Special Rapporteur on the situation of Human Rights Defenders, Michel Forst. The Special Rapporteur highlighted the attacks that women human rights defenders face in defending and promoting human rights in the current political environment. In 2008, Zimbabwe Peace Project Executive Director, Ms. Jestina Mukoko was abducted, severely tortured and illegally detained. In a progressive judgment of the High Court on 27 September 2018, the police was ordered to pay her $150 000 in damages for torture and illegal detention. Despite this landmark, notable ruling, the human rights landscape in Zimbabwe continues to be volatile for women human rights defenders and the participation of women in politics. Almost 6 months after the order for compensation of Ms. Mukoko, the Member of Parliament for Harare West – Joana Madamombe – was arrested and is currently facing charges for subverting a constitutionally elected government. The practice of torturing women and using arbitrary arrests is a threat to the freedoms of women and the realisation of their right to participation.

It is regrettable that at a time we are supposed to be celebrating women, rape continues to be used as a weapon of torture against women, some of them who are targeted because of their roles in defending human rights or participating in politics.  Since the January 14, 2019 fuel riots, the Forum has documented 17 cases of rape and sexual assault against women. These crimes are committed at both individual and institutional level. Instead of vilifying and threatening the victims of these heinous crimes, the National Prosecuting Authority (NPA) has an obligation to investigate and make sure the perpetrators are brought to book. There can never be true emancipation for women if the institutions that are supposed to serve justice act as if they are promoting impunity for violations against women.

Women continue to serve Zimbabwe through their innovation and hard work in a difficult economy. As the world celebrates the strengths and strides of women in diverse spheres, the Forum and ZWLA call on the following;