Chimanimani - A convoy of ZANU PF vehicles is at Silver Streams near here confiscating donated goods into the back of their twin cabs which bear the ZANU PF logos. 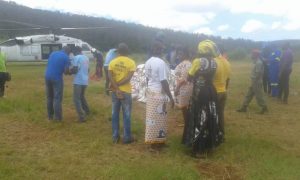 Several of these vehicles have already driven offloaded.

According to some lorry drivers who were stopped at Silver Streams this morning the Zanu pf officials ordered them to surrender their goods saying the party was the only authorized distributor of donated goods.

A helicopter delivers donated goods which are then distributed by Zanu pf officials in branded vehicles.