In the villages, urban residential areas, mining towns and in the farms, they are turning up in droves at great personal expense and sacrifice during the unfolding MDC Congress to confirm the democratic ethos of this great people’s movement by electing their leaders at the various levels of the party. 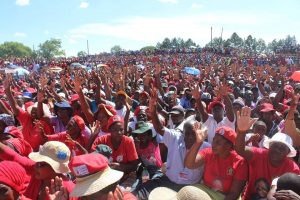 Democracy by its very nature is an involving process but it still must be done.

From Kazungula to Tamandayi, from Msampakaruma to Mandidzudzure, they are turning up in their huge numbers affirming that this is a movement of the people that is sculpting a leadership by the people and from the people.

All the provincial congresses that have taken place so far have simply confirmed that mass participation is the signature tune of this mammoth people’s movement. No huge incidents of violence have been recorded save for minor skirmishes that are to be expected in a huge movement of the MDC’s magnitude. So far, our on-going Congress has largely been a peaceful event.

The transport logistics to the provincial venues, the verification and accreditation of the delegates are involving processes that sometimes are spilling into the night. Yet in spite of the drudgery that characterizes such onerous processes, the ordinary people are exhibiting loads of patience to protect chinhu chavo (their party).

At every level up to the very top, the people are electing their leaders and no post is sacred, including the Presidency. Such is the democracy taking placing in the on-going MDC Congress process.

Even where the President has the powers to appoint people, he has devolved that process back to the people to get a feeling of their choices so that he will determine how he can combine the people and his options.

It is rare to find leaders who defer their own Congressional powers back to the people but President Nelson Chamisa, in a true affirmation of the democratic credentials of this movement, has decided to involve the people as true stakeholders in the unfolding process.

We restate that the party’s forthcoming Congress from 24-26 May will be a festival of ideas and will not solely be about positions. In fact, propositions, and not positions, will be the biggest business of the MDC’s 5th Congress.

The party has set up seven committees to look into critical areas that will re-energize this party and firmly place it in good stead to fight this military dictatorship using democratic means.

Our Congress will look at and adopt key resolutions in the spheres of institutional and organizational renewal to engender a fresh impetus that will carry the people’s struggle forward. Our Congress will not only be exuding color but it will be a haven of robust debate that will show that we are a modern, 21st century political party.

Congress will adopt far-reaching resolutions that will scale the people’s struggle to greater heights and adapt to the party to the changed geo-political environment.

In short, our Congress is not about positions but propositions on how to broaden and deepen the frontiers our democratic struggle.

True, we will regenerate our leadership but we will also re-energize the base and scale this struggle to heights and to new frontiers.

At the forthcoming Congress, we will showcase our dynamism and use this important platform to engage, to recharge and to re-awaken the people’s collective aspiration.

I wish to restate that this will be our last Congress outside the precincts of central government where we will once again showcase our competence behind the wheel of the State.

Come 2023, we will once again use the State as a pedestal to bring positive change in the lives of the people. We have done it before.

Luke Batsirai Tamborinyoka is the Director of Communications in the Movement for Democratic Change. He writes here in his official capacity.