Kadoma -  An informal miner here has died after he was severely assaulted by Litten Chikoore who accused him of stealing. 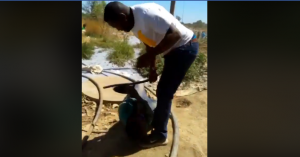 The miner or mukorokoza as they are referred to in local parlance has not yet been named.

The assault was filmed and circulated on social media where it went viral.

Police had earlier issued an appeal for assistance in locating the victim who had not reported the matter.

“While Chikoore has been located, the availability of the complainant will ensure that the law takes its course without delay,” says the police statement.