An initiative to set up a massive wildlife conservancy and historical tourism venture in Zimbabwe that would benefit the local community, as well as contributing to the revival of tourism and the economy by attracting international tourists, is on hold. 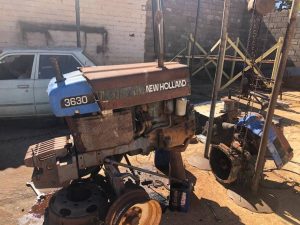 During a recent visit to Zimbabwe, Dave Joubert managed to force his way onto his farm, which has been occupied by members of the Zimbabwe Republic Police since they invaded it in 2007, to survey the damage. This photo is an example of the total destruction of his entire agricultural enterprise on Portwe Estate in Matabeleland North province.

The combined farm and safari operation which is integral to the project and would generate vital foreign currency, continues to be illegally occupied by members of the Zimbabwe Republic Police (ZRP) who took it over by force in July 2007.

Their ongoing occupation is in flagrant disregard of a confirmed court order of September 2007 compelling them to vacate the farm and return it to its lawful owner, a high profile Matabeleland farmer of approximately 50 years, and owner of Portwe Estate since 1982.

The failure of the government to remove the police from Joubert’s Portwe Estate and Bembesi conservancy, which are located in the Bubi district of Matabeleland North province, demonstrates that Zimbabwe is not “open for business”, as President Mnangagwa claims.

“With the support of Chief Nhlanhla Felix Ndiweni, the Paramount Chief of our neighbours, the Ndebele people with whom we’ve worked closely for years, we are now embarking on a campaign to apply the 2007 court order and regain our farm and conservancy project,” said Joubert.

According to the court order, the police have to vacate the property, as well as all of the buildings, and return all moveable property. All damaged property must be restored to its condition prior to the invasion. Virtually all agricultural equipment seized is now in a derelict state. The ZRP’s attempts to conduct basic cropping programmes have been a dismal failure.

Since January 2018, encouraged by the statements by government, Joubert has adopted a conciliatory approach to the situation, with the hope of creating a “win-win” solution which will enable agricultural production to resume and to pave the way for the planning and implementation of the joint venture project.

While on the face of it the initiative appeared to be well received, Joubert said there are clearly political interferences and policy anomalies which make progress impossible.

“Even entry to the farm or an audit of property taken by the ZRP at the invasion has been frustrated and blocked by senior officers operating from the Hwange district in northwestern Zimbabwe,” he explained.

The joint venture conservancy was initially the brainchild of Joubert and Governor Welshman Mahbene, and was endorsed by the late Chief Khayisa Ndiweni, the father of Paramount Chief Nhlanhla Ndiweni. It envisaged a joint venture Ndebele trust created and administered by Chief Khayisa, involving Joubert’s farms, as well as additional trust land.

The approved Hove dam site is on the property and once built, would have great potential for a recreational area with guest cottages on the lake shore, as well as an Ndebele cultural centre and village.

“We also want to attract Ndebele/international historical tourism because the road through the farm was taken by Lobengula, the last king of the Ndebele nation, so the area has immense historical significance, as well as important spiritual sites,” Joubert said.

“This visionary plan requires a government which understands the importance of initiative and will guarantee security of title, which is also critical if international investors are to participate. Beyond positive government rhetoric there is apparently no plan to follow its own laws, let alone encourage development at every level,” said Joubert.

If the police and the government continue to defy the law and the Zimbabwe constitution, there will be implications regarding government’s re-engagement with the International Monetary Fund (IMF), the World Bank and the European Union.

With the economy in the grips of a meltdown, kilometre-long fuel queues, devastating power cuts and rapidly rising inflation, President Mnangagwa has said that restoring ties with the West and multilateral lenders, including the IMF, is one of his priorities.

For this priority to be met, which is easily achievable, Joubert said that President Mnangagwa and his government would have to abide by the Zimbabwe Democracy and Economic Recovery Act (ZDERA) which was enacted by the United States in December 2001.

The policy of the US through ZDERA is to support the people of Zimbabwe in their struggle to effect peaceful, democratic change, achieve broad-based and equitable economic growth, and restore the rule of law.

In May this year, Zimbabwe signed up to the IMF’s Staff-Monitored Program, which commits the Mnangagwa government to political and economic reforms as well as fiscal discipline.

During talks held in early June between diplomats and officials in Harare, the EU’s Zimbabwe delegation head, Timo Olkkonen, said they would discuss various issues including economic development, trade, investment, property rights, good governance and adherence to the rule of law.

In blatant disregard for the rule of law, President Mugabe’s government sanctioned, and in many cases aided the seizure of white-owned farms that began in 2000 and still continues. This triggered the collapse of the key agricultural sector, resulting in hyperinflation which peaked at 89.7 sextillion percent in November 2008. (Ref. Prof Steve Hanke, expert in world hyperinflation)

Leading Zimbabwean economist John Robertson warns that the road ahead will be difficult.

“However, if the commitments made by government to bring about the greatly needed changes are sustained, the prospects of removing the instability and uncertainty affecting the country right now should dramatically improve, opening up opportunities for both local and international investment,” he said.

Background to the takeover of Portwe Estate and the Bembesi Conservancy

The invasion of Joubert’s properties took place on July 17, 2007 when he was out of the country and while only his wife, Margaret Joubert and her aged mother were at the farm.

A group of 25 police officers under control of task force commander Assistant Commissioner Edmond Veterai, armed with AK-47 rifles and dressed in riot uniforms, arrived unannounced at the farm. When Mrs Joubert denied them entry, they smashed down the door and stormed into the house.

Under police guard, Mrs Joubert and her mother were only given a few minutes to pack some belongings before being driven away and deposited at a neighbour’s farm.

Joubert’s workers were rounded up and told that the ZRP were the new owners. The officers said that if they wished to work for them, they could return to their houses on the farm.

When all of the workers declined the offer – many of them had worked for Joubert for more than 20 years and had an excellent co-operative relationship with him – they were driven off to distant locations and warned not to return.

The police, who had been brought in from Mashonaland provinces, then confiscated 4 000kg of maize set aside for staff supplies and removed it immediately from the farm. They subsequently  removed hunting rifles, licensed ivory and a brand new generator.

“It also appears that a number of high profile police officers removed building supplies and items of machinery, as well as 22 head of cattle,” Joubert said.

The police officers later went across to Joubert’s neighbours and forced them at gunpoint to hand over their television set, sound system and decoder.

At the time of the police invasion (most invasions involved government-sponsored youths claiming to be war veterans or the youth militia), the farm was running the following programmes:

The entire operation was run with highly-trained black Zimbabwean managers supported by a permanent staff of 60 and between 100-150 women contract workers from the local rural community.

In addition to the highly successful farming operation, Joubert created the Bembesi Conservancy – with government’s assistance. He built it up with the purchase of a wide variety of indigenous species of game and developed an international reputation for high-end hunting safaris.

Joubert’s Bembesi Lodge was built in the 1990s to accommodate the growing popularity of hunting on the estate. It attracted international visitors as well as local and regional holiday-makers during the summer months, also offering outstanding fishing, game viewing and birding opportunities.

The lodge achieved a total occupancy of 1 500 bed nights annually and recorded an occupancy rate of 95 per cent.

The invasion of the estate resulted in the withdrawal of the large hunting quota and the cancellation of summer lodge bookings after armed members of the ZRP threatened the booking agents at gunpoint and warned them not to take any further bookings.

The police attempted but failed to attract visitors to the lodge themselves and instead used it to entertain high-ranking officers and politicians, as well as for secluded meetings. The severe fire damage to the lounge was caused during a drunken party.

Further damage to property on the farm includes the destruction of, inter alia, three hunting vehicles, an almost new Nissan truck awarded to Joubert’s senior manager as a bonus, and New Holland tractors, as well as the Jouberts’ personal Landcruiser. Attempts to conduct an audit of all property continue to be thwarted by political interference and senior police officers.