Why do people have to sacrifice so much to become free?  And why do those in power resist so much people’s desire for freedom? 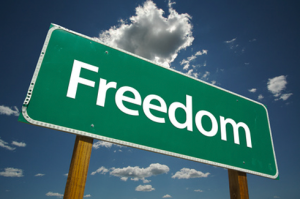 These are modern questions.  For centuries, people felt they had no choice but accept whoever it was who ruled. If they were lucky he or she was benevolent. Often this was not so and people suffered in silence under the weight of tyranny. Today things are different.  People believe things do not have to be as they are. Change is possible.

That is why the people of Sudan are engaged in a life and death (literally) struggle to attain civilian rule, knowing full well that even if and when it is attained it is only ‘half a loaf’.  Civilian rule can also be manipulated to benefit a few at the expense of the many. There is often a further struggle – to make civilian rule accountable to the people. The United States struggled to attain her freedom two and a half centuries ago. But less than a hundred years later she was involved in another bitter struggle to extend that freedom. Thousands died. Halfway through that war President Lincoln told the people:

It is rather for us to be here dedicated to the great task remaining before us—that from these honoured dead we take increased devotion to that cause for which they here gave the last full measure of devotion—that we here highly resolve that these dead shall not have died in vain—that this nation, under God, shall have a new birth of freedom, and that government of the people, by the people, for the people, shall not perish from the earth.

Sudan is not the only country engaged in this struggle today. There are others; some further along the way to accountability than others. I live in one country north of the Zambezi and have strong ties with another south of it. The common element in both countries, and in many others, is the lack of a civic sense.  People do not own their country, they tolerate it.  The government owns it and so – like someone who rents a house – they, the people, have little desire to repair it or improve it. They do not invest, in every sense, in their country because they do not feel it is theirs.

In the euphoria of freedom the leaders of the new Zimbabwe set out high ideals:

ZANU believes that the common interests of the people are paramount in all efforts to exploit the country’s resources; that the productive processes must involve them as full participants in the decision making processes, management and control of those resources. (Election Manifesto 1980)

The same people who wrote these words then are running the country now. Do they reflect on how far they have gone along the road of achieving these goals?

And the people, how long will they wait patiently renting their own house?

Sunday is the feast of Pentecost when ‘what sounded like a powerful wind shook the whole house’. The gift of the Spirit is not for our personal lives only but for the whole human family and if it is to have an effect it must reach into every corner of our lives – even our civic sense.