HARARE (Xinhua) -- The water levels at Lake Kariba, which hosts Zimbabwe's anchor hydro power station, continues to decline and is now at 29 percent of capacity because of the drought that hit southern Africa during the 2018/19 season. 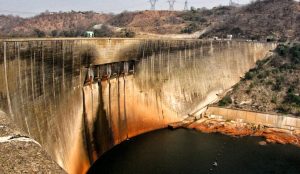 Figures released by the Zambezi Water Authority (ZRA) Monday show that the lake is now 29 percent full, compared to 85 percent during the same time in 2018 and 56 percent in 2017.

Zimbabwe and Zambia, which have two power stations at Kariba Dam, have had to curtail electricity generation and introduce load shedding after ZRA ordered a reduction in water usage following the El Nino-induced drought.