'Think how much better we would be with funding' 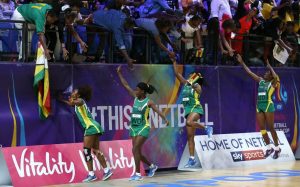 A few hours before his side claimed an unlikely third World Cup victory over Barbados on Tuesday, Zimbabwe head coach Lloyd Makunde snatched some time for a quick shopping trip in Liverpool city centre. With a meagre sum of £30, he headed for the nearest sports shop to see how far he could stretch his cash.

The objects of his desire were “cones, resistance bands, hurdles” and the type of training equipment that every netball club in Britain has in abundance, but which are so lacking in Zimbabwe.

By any standards of elite sport it was a paltry amount, but the crucial fact is this was Makunde’s own money; the coach forced to take cash from his own pocket to try to further Zimbabwean netball’s cause. “I am buying for myself, but doing it for the country,” he tells Telegraph Sport.

Makunde is cheery as cars whizz past us on the dual carriageway that Zimbabwe’s budget Liverpool hotel sits on. He has good reason to be content. Having coached the national side for 22 years, he has spent the past few days watching his team take the World Cup by storm on their tournament debut.

Ranked 13th in the world, they are certain to finish no lower than eighth and could yet come fifth – a staggering achievement.

In fact, it is not just their first time at a World Cup, but the first time they have played any of the world’s best teams. Ordinarily consigned to facing only fellow African opposition, they did once fly out to Hong Kong, where they faced lowly nations who failed to even qualify for this tournament. That is the sum of their global netball experience.

So the fact they have beaten Sri Lanka, Northern Ireland and Barbados, as well as causing unexpected problems for reigning world champions Australia, is something of a marvel. Even more so when you consider the hardship they have endured to even be here.

With money hard to come by and sporting funds in an overwhelmingly patriarchal society diverted towards the nation’s male footballers, the netball team were forced to crowdfund their way to this tournament.

Even then, says Makunde, “we were with our begging bowl and nobody looked at us”. The desperate hope is that success in Liverpool will change that.

“Our game is rising bit by bit,” says Makunde. “But imagine if we had the funding that we want, the equipment, the infrastructure.

“We have only one indoor court in Zimbabwe, but it is being used by basketball and volleyball, so it’s hard for us to use. So we train outdoors. It was only when we came here that we started practising on the type of court everyone else uses.

“We need training equipment. We always come up with anything to substitute equipment, but you can’t substitute something like a resistance band. While I am here I’m going to buy myself some equipment with the little I have, so that when I get home I can rely on that, lest anything doesn’t change.”

Just two of Zimbabwe’s World Cup squad ply their trade away from their home country – star shooter Joice Takaidza, who lives in Australia, and Adelaide Muskwe, a student at Nottingham Trent, whose twin brother Admiral plays football for Leicester City.

The hope, says long-term captain Perpetua Siyachitema, is that some of her team might be scouted to join Severn Stars player Muskwe in the English Superleague, or one of the other major global leagues.

That prospect has gone for Siyachitema – one of a large majority of Zimbabwe players who are also mothers – whose international career will come to an end after this World Cup.

She can retire content having played the best teams in the world, in front of a spectacular troop of Zimbabwean fans who have lit up the M&S Bank Arena every day.

“I was so excited when I saw we were in a group with Australia and New Zealand because it has always been my dream to play them,” she says. “We really wanted to prove how good we are. We only play other African teams so we aren’t out there on the netball map. People don’t know us.”

For any progress to be made, that must change immediately, says Makunde. He has a simple plea to the world’s leading netball nations: “Let us play you.”

He says: “Imagine if we had come here after playing a friendly with England, Jamaica or New Zealand. Then we could sit down and learn from where we went wrong. Think how much better we would be now.

“Even for tournaments in Africa, teams like South Africa, Uganda and Malawi don’t come because they are low profile tournaments. So we are only able to play teams ranked lower than us.

“We have abundant talent in Zimbabwe. If we can get exposure and financial resource I know we can go far. If we get that, I assure you come the next World Cup we will be a force to be reckoned with.”