New footage has emerged of what appears to be yet another attempt on the life of a cigarette industry boss, following a hit on Gold Leaf Tobacco Corporation’s Simon Rudland this week. 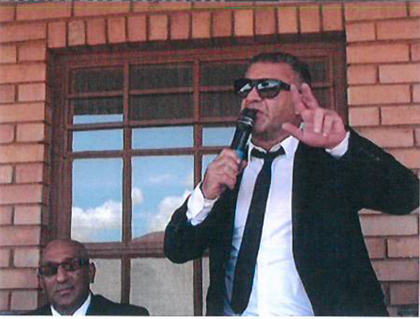 New footage has emerged of what appears to be yet another attempt on the life of a cigarette industry boss, following a hit on Gold Leaf Tobacco Corporation’s Simon Rudland this week.

Rudland survived after being shot three times by a gunman as he was arriving for a meeting at the Fair Trade Independent Tobacco Association (FITA) offices in Oaklands, Johannesburg on Wednesday morning.

The shooter opened fire as Rudland pulled into the driveway in his Porsche Boxster. He managed to drive himself to hospital and is recovering.

FITA has decided to release footage of a separate incident targeting controversial businessman Adriano Mazzotti in June. Mazzotti is the director of cigarette company Carnilinx, which is also a member of FITA.

FITA’s chairperson Sinenhlanhla Mnguni says they believe they are dealing with something more sinister than they first thought.

“FITA decided not to release the footage of this incident at the time as we thought it was just a random criminal act, similar to those experienced by many South Africans on a day to day basis. But after the Rudland shooting, and death threats to FITA member Yusuf Kajee and his business partner, it is clear that FITA members are being targeted by far more sinister forces.

“For that reason, FITA members have now agreed to release the footage of this attack on one of our members. We feel it is in the public interest and we’re calling for information from the public at large in relation to these incidents clearly meant to intimidate our members. We are also calling on law enforcement agencies to intervene and protect FITA members from these criminal elements,” says Mnguni.

The latest released CCTV footage captures an incident which occurred on June 22, when Mazzotti was visiting his 88-year-old mother at his sister’s house in Illovo.

The video shows Mazzotti being ambushed by gunmen in a white VW Golf. He rams his vehicle into the Golf and the suspects flee. Initially, he thought it was a random hijacking attempt but has since changed his mind. The shooters in the attack on Rudland were also in a white VW Golf.

“The similarities are sinister and obvious, I thought it was random until the Simon incident. It was a quiet Saturday morning and I picked up on what was happening, and as they stopped behind me and I saw the firearms being pointed at me, I put the car in reverse and slammed into them twice.

“The guy closest to me got a bit crushed, I think, and the guys getting out the car on the other side got knocked off their feet. One of them ran to my window and pointed a firearm at me, but he looked in shock and seemed to be trying to pull the trigger and shouted ‘Move your car!’

“The whole thing was over in seconds,” says Mazzotti.

The tobacco baron is no stranger to controversy. Earlier this year, SARS obtained a High Court warrant to attach his movable property to the value of just over R33m, to pay his company’s debt to the tax man.

He’s accused of smuggling cigarettes and SARS claims he owes over R70m in VAT and excise duties. He has also been linked to funding political parties like the EFF, and the NDZ 2017 campaign for the ANC presidency.

Commenting after the failed attempt on his life this week, Simon Rudland pointed the finger at his colleagues within FITA.

“I’m 100% sure it’s one of the [FITA] members. It’s such a cowardly act that they can’t confront me directly. My belief, and it’s only speculation, the coincidences of what has happened are going through my mind. With Gold Leaf being the biggest competitor, they have to protect their share of the market,” said the Zimbabwean national.

But FITA’s Mnguni insists the threat is coming from outside the organisation.

“We have discussed with Mr Rudland the issue of comments attributed to him in the media regarding the incident on 14 August 2019. He is rightfully upset given the circumstances, but we have cautioned him against making bold public statements at such an early stage in the investigations into the shooting incident.

“Rudland expressed that he simply wants whoever is responsible for the cowardly act perpetrated against him and his attorney to meet the full might of the law. In this regard, we give Mr Rudland our full support and backing collectively as an organisation.

“At this stage, we have decided to allow the police to conduct their investigations in relation to the aforementioned incident. We want whoever is responsible for this senseless and evil act to be apprehended and prosecuted swiftly,” says Mnguni.

Tensions have long been simmering between the smaller independent tobacco producers and the so-called “big boys”, the major producers who are affiliated with the Tobacco Institute of South Africa (TISA).

These heightened tensions have also been exacerbated by the recent release of a tell-all book about the clandestine black ops and violence associated with the industry, written by former tax sleuth, Johann van Loggerenberg. In Tobacco Wars, Van Loggerenberg details the dirty tricks, espionage and threats allegedly employed by FSS, the private security arm of TISA.