Zimbabwe chess team taking part in the Morocco All Africa chess games of mixed teams men and women came a credible third out of twenty teams winning a Bronze medal. 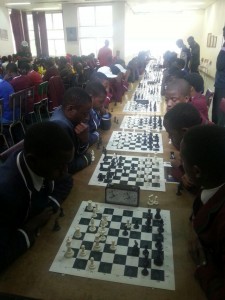 In the opening game the team defeated Eritrea four nil, the second round game was the defeat in which the team was humiliated by the highly rated Algerian team by 3-.1.  The ladies saved the team from being whitewashed after they managed to salvage some draws on their respective boards. After this the team never lost a single game. The team then drew against Zambia in round three. International Master Rodwell Makoto defeated International Master Stanley Chumfwa on board one while Emerald Mushore lost to international Master Andrew Kayonde on board two while one of the ladies salvaged a win ensuring a draw for Zimbabwe. Zimbabwe then defeated Angola by 2.5-1.5.Cameroun lost 0.5-3.5, and Morocco lost 1.5-2.5.The most important draw was against the highly rated Egyptian Pharoahs in a do or die game in which the Zimbabwean men players International Master Rodwell ’Kotov’ Makoto and Emerald ‘Nolimov’ Mushore rose to the occasion defeating the highly rated Grand Masters

Adly Ahmed rated 2636 and Baseem Amin rated 2692 in pulsating games which led to the likes on the social media after the much touted result as they defeated the invincible chess players in Africa chess. The ladies of Egypt had to save the face of the male counterparts when they humbled our Zimbabwean lady players. This led Egypt to salvage a draw in a mouth-watering encounter. Zimbabwe was the only country which salvaged a draw against this team, even the mighty Algeria fell by the way side so was Zambia, Botswana was defeated four nil and Malawi. Zimbabwe was to play to another draw after fighting all guns blazing against Egypt, they also drew against Nigeria with Makoto winning his game in an interesting fashion. The result was a 2 all draw against the Nigerians. In the final round Zimbabwe needed a draw to finish third and win a bronze medal.

Zimbabwe faced Botswana in a do or die encounter which was all guns blazing as the team only needed a draw to claim a third position winning a bronze medal. Zimbabwe drew on board two where Phemelo Kheto was playing against Emerald Mushore and Colletah won against her opponent in an exciting fashion. The team had a lead of 1.5-0.5. there was a defining moment for the team as the board  three player defeated Linda Shaba when she failed to contain a balanced position which was very exciting and almost drew, alas she failed to balance with the time pressure as well as these were 15 minutes plus 10 second games. The game levelled to 1.5-1.5. The responsibility was now on the experienced Makoto to ensure that Zimbabwe bagged the first team medal at the All Africa games.

He commanded a lead in development as well as the material. With two pawns up he knew that draw was the safest result for the team to scoop the much needed medal. There was a truce on the board so was the overall result which was 2 -2. This lead Zimbabwe to a historic third place finish at the All Africa games after the previous Olympiad result in Batumi where they were the second best African country at the games. Makoto and Mushore happen to be part of both histories so is Candidate Master Spencer Masango who was the Coach for the team in Morocco. International Master Rodwell Makoto finished with 6.5/ 9 games played, while Candidate Master Emerald Mushore had 5 points, Linda Shaba had 4.5 points and Colletah Wakuruwarehwa finished with 5.5 points. In the final log standings Egypt scored 17 points followed by Algeria who had 14 points while Zimbabwe was third with 12 points.