Robert Mugabe's widow Grace and his children accompanied the coffin. 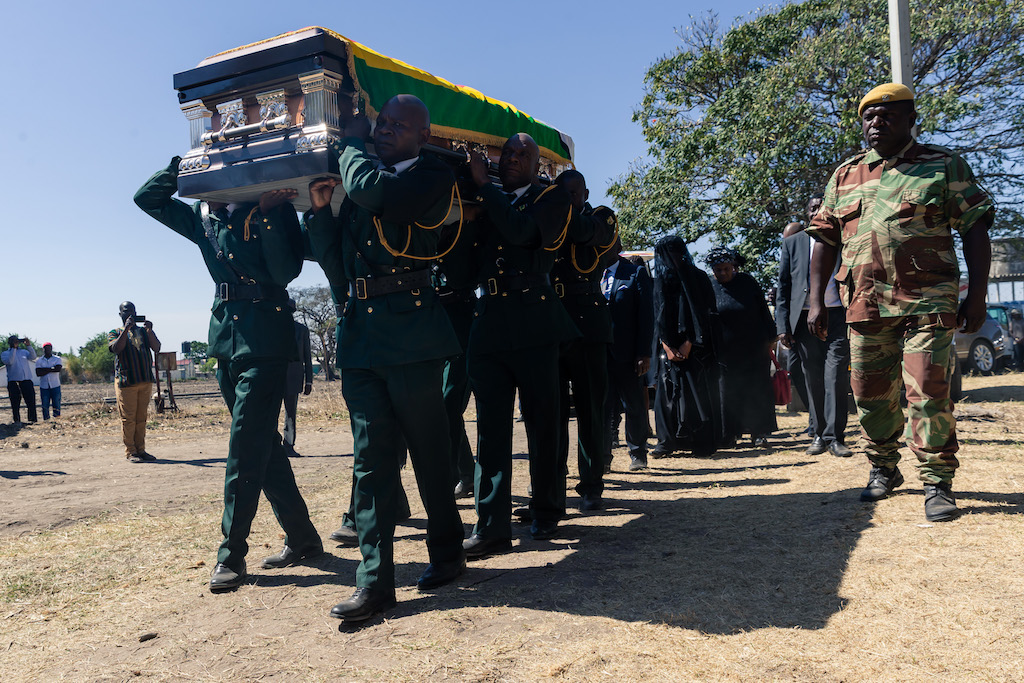 The coffin of former president of Zimbabwe Robert Mugabe arrives for his burial at his home village in Kutama, on 28 September 2019.

HARARE – The body of Zimbabwe’s former president Robert Mugabe was buried on Saturday in a low-key ceremony in his home village after weeks of wrangling over his final resting place.

Family members threw white roses into the grave as the coffin of the liberation hero turned despot, draped in navy blue velvet, was lowered to its final resting place in the courtyard of his rural home about 90 kilometres west of Harare.

A boys choir from Mugabe’s old highschool sang in the background.

The burial in the village of Kutama came after the Mugabe family finally opted to reject government proposals that he be laid to rest at the National Heroes Acre in the capital.

Hundreds of mourners assembled for the burial, which was initially intended to be a private family event.

Some sang and danced. Others sat quietly under two white tents.

Mugabe’s widow Grace and his children accompanied the coffin.

Clad in black, they took their places in a VIP tent ahead of the service.

The words “DAD” and “BABA”, meaning “father” in the local Shona language were spelled out in white flowers.

“Our hearts are bleeding because we have lost our father,” said the priest, standing next to a portrait of Mugabe framed by white carnations.

“This is a man who made use of the gifts he was given by God. This man was an asset, he was not a liability.”

No senior government officials were among the audience.

A mausoleum was being constructed at the site in Harare reserved for heroes of Zimbabwe’s liberation struggle.

However the family said on Saturday he would not have wished to have been buried there.

“What we have done is his wish,” said Grace’s older sister Shuvai Gumbochuma, addressing mourners in Shona.

“He (Mugabe) said with his own mouth that he didn’t want to be buried at the heroes acre,” she said.

The ruling ZANU-PF party described the family’s decision as “most unfortunate”.

“All patriotic Zimbabweans were shocked to learn that the remains of the former president had been surreptitiously taken yesterday to Zvimba for a private burial,” said spokesman Simon Khaya-Moyo in a statement on Friday.

Initially hailed as a pan-African liberator, Mugabe’s rule became increasingly repressive as he cracked down on his political opponents.

This was combined with a series of disastrous economic policies that drove millions of Zimbabweans abroad.

Mugabe was eventually toppled by his formerly loyal military generals in 2017.

Many in the family are bitter over his ouster and the role played by his deputy and successor Emmerson Mnangagwa, who was elected president in 2018.

The army turned against Mugabe after he sacked Mnangagwa, a move many saw as an attempt to position Grace to succeed him.

“I was very comfortable that he be buried at the heroes acre,” said local official Christopher Ndlovu before the ceremony.

“That’s what we wanted as local villagers. But since it’s a family decision to bury him here, we will respect it.”