The union says the country’s borders need to be tighter. 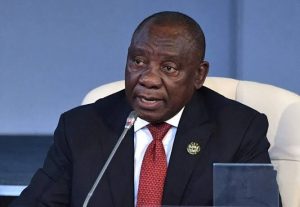 JOHANNESBURG – President Cyril Ramaphosa says the booing in Zimbabwe was not directed at him but at all South Africans.

People jeered when he spoke at the memorial service for former Zimbabwean President Robert Mugabe, in Harare at the weekend.

Zimbabweans showed their anger at recent attacks on foreigners in Gauteng.

Ramaphosa was addressing the Southern African Clothing and Textile Workers’ Union in Durban.

Over 2,000 delegates from Sactwu gathered at its 14th national congress.

Ramaphosa says the industry has huge potential to grow the ailing economy.

But he says the country’s global stature has been tainted by xenophobic violence.

Sactwu, Cosatu’s sixth-largest affiliate, is facing serious challenges, such as job losses and an influx of foreign goods.

The union says the country’s borders need to be tighter.

Sactwu is expected to elect new leaders before the conference ends on Wednesday.