A number of reports this week exposed the worsening situation in Zimbabwe, facing hunger and malnutrition, continued abuse of human rights and a contracting economy. 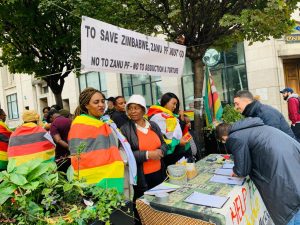 On Wednesday the World Food Programme marked World Food Day with a report that 63% of Zimbabweans lived below the poverty datum line and 27% of children have stunted growth. It said up to 5.5 million people will be food insecure by January.

For its part, the Zimbabwe Human Rights NGO Forum, in its annual report this week, calls for an inclusive and comprehensive national dialogue to create a culture of respect for human rights and urges greater compliance with the constitution, genuine reform of repressive laws and the reform of the security sector as well as fair and impartial application of the law.

The need for reform was underlined by the murder this week of a Harare vendor while in police custody. 29 year-old Hilton Tafadzwa Tamangani died in agony after being savagely beaten with batons.

Meanwhile the International Monetary Fund has widened its estimated contraction of Zimbabwe’s economy this year to 7.2%, with endless price hikes pushing the economy into hyper-inflation.

Soaring prices have prompted Zimbabwe’s public sector unions to warn that people were simply unable to afford to go to work. The unions are demanding that government employees should be paid US dollar-indexed salaries. They want the lowest paid workers, who get Zim $1,023 (US$67) a month, to receive the equivalent of US $475.

Workers may not have the fares to get to work or food for breakfast but President Mnangagwa was able to hire a private jet from Dubai to pick him up from Harare and take him on a 35-minute flight to Bulawayo at US$30,000 per hour.

‘Once again we get a whole luxury aircraft hired from Dubai to fly Mr Mnangagwa from Harare to Bulawayo when doctors can’t even afford to catch a taxi to work,’ MDC treasurer David Coltart said. ‘The callousness and insensitivity of this regime to the appalling suffering of people is now simply disgusting.’