It's not pleasant to begin the week on bad news, but Zimbabweans are getting accustomed to it, writes Crecey Kuyedzwa from Harare. 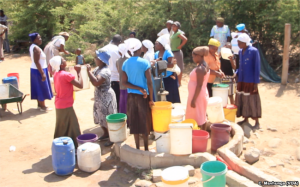 It’s not pleasant to begin the week on bad news, but Zimbabweans are getting accustomed to it.

For the past four or so months, new fuel prices are announced every Sunday evening. Sometimes the announcement comes as late as 11pm. Last week was no exception, as many Zimbabweans woke up on Monday to the news that they would be paying 11% more for fuel.

Zimbabweans have lost count of the number of times fuel has gone up this year. All they know is that they now pay roughly 775% more than they paid in January 2019. The year started with petrol at $1.31 (local bond notes) and diesel at $1.26.

Zimbabwe is facing its worst drought in almost four decades, in addition to cyclone-induced floods and economic collapse, which have left Zimbabwe on the verge of its worst-ever famine, Bloomberg recently reported.

To add to the challenges faced by the southern African nation, a bailout was required to address water supply issues in the capital, Harare.

“Harare City Council has run out of key water treatment chemicals….and if no urgent bailout is given between today and Tuesday, management will be forced to shut down Morton Jaffray Water Treatment Plant,” the City of Harare tweeted last Monday. A million people were left without water when the plant was shut down.

The city council said it was “stretching the little available amounts to treat limited supplies of water”.

According to the municipality, it buys “foreign currency on the runaway interbank exchange market against a stagnant and inflexible budget”. Like water, local dollars to buy foreign currency had also “run dry”, it said.

Government recently released $37.4m (Zimbabwe dollars) plus an undisclosed amount of foreign currency towards interventions to improve water access and waste water treatment in Harare. Zimbabwe faced a severe cholera outbreak in 2018, and inadequate facilities to treat water increases the risk of another outbreak.

As if this were not enough, the country’s biggest mobile network operator, Econet, was also a bearer of bad news last week, noting that it would be reviewing bundle prices for data and SMSes. Daily data bundles increased in a range of 20 – 38.5%, the third tariff increase this year.

“The argument is simple; all costs have gone up, primary currency has weakened but real tariffs have remained the same,” said a senior official with Econet, who requested anonymity as he is not allowed to speak to the press.

It previously hiked data tariffs twice in the space of a month.

Despite the spiralling costs of daily living, Zimbabweans are not facing a corresponding increase in income. Despite government workers recently being offered a 76% pay hike, recent reports across Zimbabwe have indicated that in many important economic sectors, struggling employers are paying wages that fall below the total consumption poverty line (TCPL).

Most of Zimbabwe’s troubles are, however, coming from the plummeting exchange rate.

Officially, Zimbabwe’s local dollar has lost more than 80% of its value since February – but the black market rates show an even larger decline.

Speaking at a meeting with a group of supporters in New York, where he was attending the United Nations General Assembly, Mnangagwa said his government had acted on “smart people” hurting the currency.

“We have people who find ways to fight that and undermine (the currency), but yesterday we also became smarter than their being smart, so we took some action,” Mnangagwa said.

“We have now arrested the galloping rate, which had gone up to about 20, 23, 24. By the time we left it had come down to about 15 and it’s still coming down, because we had put up some measures,” Mnangagwa told party supporters.

This was of little comfort to importers as they still had to pay 40 cents more on the following Monday than they had on the Friday.

In another demonstration of how desperate things are for Zimbabweans, the country’s statistics agency, Zimstat, last week released data saying a family of five needed to earn $1 827 in local currency in order not to be deemed poor. This compares unfavourably to the salaries of government workers, where the lowest paid earn $1 023.

All Zimbabweans want is better livelihoods, to put food on the table, to have running water, to have electricity, and medical care. But all these things remain elusive. The hope that many had when President Mnangagwa assumed office is fading fast.

And unless he deals decisively with corruption, improves the ease and cost of doing business, gets skilled farmers on the land and gives them tenure, then the misery of unemployment and hunger will continue unabated.