FILABUSI, Zimbabwe (Thomson Reuters Foundation) - Under the blazing sun, a group of men use picks and shovels to dig up a bushy patch of land outside Zimbabwe’s second-largest city, stopping every few seconds to scan the soil for signs of gold. 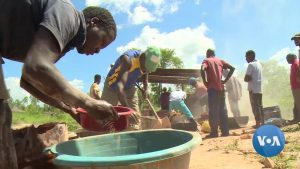 The 13 men, led by one carrying a metal detector, left open gullies all over the area in Filabusi, about 80km (50 miles) south of Bulawayo.

They told the Thomson Reuters Foundation they would dig wherever their metal detectors sensed gold, clearing bush and burning grass if they had to – even on someone else’s property. None of the men had a mining permit.

“Whenever you hear of a gold rush, you know serious money is involved. People literally pick up gold nuggets,” said Thomas Ncube, one of the miners whose name has been changed to protect his identity.

With Zimbabwe going through its worst economic crisis in a decade, desperate citizens are turning to illegal gold mining to make a living, officials say, sparking fervent gold rushes that can lead to violence and drive people from their land.

The problem has gotten worse over the past year, warned Robert Msipa, a district officer with the government’s Environmental Management Agency.

“In some recent cases police have (had) to set up bases, as such gold rushes are punctuated with machete violence,” he said in a phone interview from Bubi, the district he oversees in western Zimbabwe.

A spokesman for the national police force in Harare declined to comment.

There are no official figures on illegal gold-mining activities in Zimbabwe.

But Msipa noted that since September 2018, eight gold rushes involving both licensed and unlicensed miners have been recorded in Bubi district, one of the most gold-rich areas of the country.

Locals in other parts of Zimbabwe reported similar spikes in illegal mining in their areas.

In the country’s western Insiza district, farmers described how in October illegal miners burned most of their grazing lands to clear the way for digging, and then left behind vast open pits that injured cattle who fell into them.

“They burn grass for their metal detectors to work and use mercury which is very dangerous to our livestock and humans,” lamented villager Soneni Ncube.

Zimbabwe’s gold-mining sector accounts for about 40% of the country’s mineral output, according to the Zimbabwe Miners Federation (ZMF), an umbrella body of gold miners’ associations.

That makes gold second only to tobacco in the amount of foreign currency it brings into Zimbabwe, said Dosman Mangisi, a ZMF spokesman.

The mineral-rich southern African nation sees the mining sector as the main driver for reviving an economy crippled by triple-digit inflation and high unemployment.

Prosper Chitambara, an economist and researcher at the Labor and Economic Development Research Institute of Zimbabwe, said that the country loses up to $3 billion each year in potential earnings to illegal gold mining.

“That affects the fiscal capacity of the government to be able to invest in the socio-economic rights of its citizens,” he said.

For communities living on gold-rich land, the impact of illegal mining is often more personal and destructive, noted Jane Lusinga, the ZMF regional representative for women in the province of Matabeleland North.

She pointed to the latest gold rush at Lonely Mine, the site of operations for several small-scale mining companies in Bubi district.

There are no official figures on how many families have been displaced by recent gold rushes, said Lusinga, but she estimated about 3,000 illegal miners had descended on to the district over just a few weeks starting in September.

One group burned down a farmer’s mud-and-grass house, she said. “(The) miners then proceeded to dig up the hut’s foundation and the (farmer’s) entire fields in search for gold.”

That was one of several cases of families being displaced by illegal gold miners that the ZMF is investigating, she added.

The organization is holding regular meetings with miners, residents, government officials and traditional leaders “to try and see how we can lobby for a permanent solution to this issue,” Lusinga said.

Nhlanhlayamangwe Felix Ndiweni, the chief of Ntabazinduna village in Matabeleland North, said that his village is regularly inundated with illegal miners looking to strike gold.

“These gangs are armed and organised. It’s as if they are operating above the law … They seem to come and go as they please,” he said.

The ZMF said it does not have the resources to stop the sudden surge of illegal gold mining, or the violence and destruction that comes with it.

“There is nothing that can be done to lessen gold rushes in Zimbabwe,” said Mangisi of the ZMF. “(All) we can do is to mobilize and register illegal miners so that they can mine legally.”

Earlier this month, the government reaffirmed its aim to more than triple the revenue generated by Zimbabwe’s mining sector to $12 billion by 2023.

Those plans include a commitment to registering more artisanal miners to try to tackle the illegal industry, noted Mukasiri Sibanda of the Zimbabwe Environmental Law Association, a non-governmental organization.

It is an important step toward helping Zimbabweans benefit from the valuable resources under their feet, he said.

“When you look at gold mining, and artisanal mining (specifically), it provides an opportunity for communities to directly own and control their natural resources,” Sibanda said.

“Through registering artisanal miners, communities can be empowered to develop themselves.”