It’s that time of the year when we should reflect on the year that has now almost passed and think about what might happen in 2020. 2019 has not been easy for anyone. We have seen a sharp rise in inflation, worse, the exchange rate for our local currency has collapsed and living standards have declined for the great majority of our people. 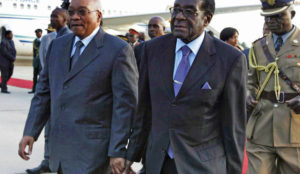 We now know that the mess the Mugabe era left us in was much worse than any of us appreciated at the time. When Morgan Tsvangirai was faced with the choice of going into the Government of National Unity in 2009 or staying out, I said to him when we were reviewing the economic plight of the country “do you really want to take responsibility for this mess?” Fortunately for all of us his decision was “yes, for the sake of the people.” It opened up 4 years of relative stability and recovery. We need to remind everyone that over those 4 years the average annual recovery in State income and expenditure was 70 per cent, in hard currency.

Our problem was that the moment Mr Mugabe took over the reins of power in 2013, he immediately reverted to the policies and programmes that had brought Zimbabwe to its knees in 2008. Let’s just remember what it was like in December 2008 – incomes for people in paid employment were down to US$5 per month, 150 000 people in Harare had cholera, 70 per cent were on food aid, schools were closed and hospitals were just glorified mortuaries, except that the bodies rotted because there was no refrigeration. Life expectancy had halved, maternal mortality of women in child birth and infant mortality for children under 5 were the highest in the world. Our population was declining by 5 per cent per annum as people fled the chaos for greener climes.

How did we survive those conditions? But we did! And when we got a half a decent Government, we rebounded and began to show just what we could do if our leaders allowed us to get on with our lives and stopped stealing our future.

No sooner had we just started out on a new road to recovery and growth when once again the political and economic delinquency returned.

When Mr Mugabe was finally forced to resign and hand over to a new leadership, tremendous damage had already been done to the economy – but the true cost was hidden by artificial exchange rates that overvalued our local currencies. When the new President, Mr Mnangagwa appointed a completely new economic team in the Ministry of Finance I do not think he really understood what the consequential clean-up was going to entail.

First the overvalued exchange rate. The new Team recognised that this had to be corrected or else the whole mountain of domestic debt in a false currency would collapse and take the country with it. They announced that the local currency was a thing called the RTGS dollar – an economic and digital animal that had no relationship in any way to the US dollar. We all knew that because we understood that if we took our pieces of Bond paper to the Bank there was no way that they could ever give us real dollars in return.

But it was when they actually said that, that we became painfully aware that we were not rich anymore. The market began to devalue the local currency, a process that has continued throughout 2019. The result is that one US dollar in our accounts in December 2018 is now worth 5,8 US Cents.

Then there was our national debt. Up to 2000 we had multiplied our national debt by ten times since Independence. Increasing our net international liabilities by US$500 million a year or just over 1,4 million US dollars a day. Our intervention in the Congo to support Kabila, doubled that sum for three years and the reparations paid out to our war Veterans doubled the debt expansion for another two years. In the four short years from 2013 to 2018, the Mugabe Government built up domestic liabilities to over US$23 billion. That is US$500 000 per Month. By November 2017 our fiscal deficit was running at 40 cents in the dollar. We were living in a fool’s paradise and way beyond our means.

So the second issue confronting the Finance Team was how to bring us all down to reality and to deal with this completely unsustainable and unserviceable debt. We had to eat the mountain and the only way to do this was to allow inflation to do its merciless work. Today the total value of the debt left behind by Mugabe is probably only US$2 billion, devalued by inflation by over 85 per cent.

The next problem was to stop the bleeding. At the scene of an accident, the key issues are, are the injured breathing and then, are they bleeding? We were breathing as a nation but we were also bleeding. To stop the bleeding, the Team had to raise new revenue and to hold down expenditure. The 2 per cent tax and tough controls on line Ministries did the that but the cost has been that Civil Service salaries have been reduced to levels where the Service can hardly survive. If Mr Mugabe had been in charge he would have simply ordered the Team to increase salaries – after all he was famous for saying in 1997 that “countries do not go broke, print the money needed”.

This time that has not happened and we are now in a situation where these fundamental distortions and problems left behind by the Mugabe era have been dealt with. Just when we think the cleaning up is finished we discover Z$10 billion dollars in unauthorised expenditure between 2015 and 2018. Even though Permanent Secretaries have been threatened if they exceed their budgets, over Z$5 billion in unbudgeted expenditure has been discovered in 2019. This might be even greater once the exchange losses at the Reserve Bank are accounted for. The culture of spending what we do not have goes on and will not be easily uprooted.

But look at the countries balance sheet today compared to last year. We have a fiscal surplus to help meet over expenditure, inflation has dealt with the domestic debt mountain and our balance of payments is almost in surplus. We have started paying back our debts – both internal and external. We have secured a Staff Monitored Program with the IMF and although there are problems and the program will have to be extended to give us more time to get our house in order. Our exports are growing and investment is slowly gathering momentum.

We have taken the harsh medicine of income restraint and are now in a position to start servicing all our other priorities. Fixing our infrastructure, improving power supplies and reducing the cost of doing business. Our economic fundamentals are sound and the way clear to dealing with our international liabilities. I am hoping that by December 2019 Zimbabweans will be able to see the start of a slow, but steady recovery. Next year inflation will come back to low levels by the end of the year, exchange rates will strengthen and start restoring value to earnings and capital. Our farmers will get some security of investment in the form of a negotiable lease over the land and assets they are using and our urban areas will slowly be able to restore service delivery.

2020 will not be easy, but after what we have been through it will be like the morning after the rain. To really succeed we have to work together and have faith in who we are as a nation. If we do those few simple things, the future will look after itself.