Thousands of residents residing in Lochinvar are facing displacement after the controversial businessman, Billy Rautenbach through his company Marimba Properties claimed ownership of the area. 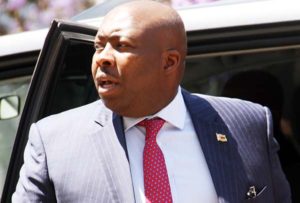 The residents occupied the area in 2009 under the Joshua Nkomo and Leopold Takawira Housing Cooperatives.

The area was gazette for settlement by the government in 2010 after which the cooperatives received offer letters for the area.

In December 2015, the then Minister of Local Government, Saviour Kasukuwere toured the area in the company of senior officials from his ministry.

The area in question is Stand Number 48, 49 and the remainder of Salisbury Park of Lochinvar.

During the 2015 site visit, former Minister Kasukuwere conceded that the area had been fully developed and evictions or demolitions must be stopped and the area should be regularized.

Documents in CHRA’s possession indicate that Mr Rautenbach accepted the proposal as the Chairman of Marimba Residential Properties.

It was also agreed that council would take over the administration of Stands 48 ad the remainder of Salisbury Park of Lochinvar.

However, in March 2018, the Ministry of Local Government wrote to the Chairpersons of Joshua Nkomo, Leopold Takawira, Wadzanai, Mydek and Dzapasi housing cooperatives informing them of the cancellation of offer letters that had been issued to their members.

Read part of the letter signed by E. Mlalazi (Secretary for Local Government, Public Works and National Housing), “The Ministry had issued those offers believing that the land had been acquired for use by the State. Regrettably, the acquisition process was abandoned by the Acquiring Authority after unsuccessful legal contestations on the part of the Ministry.

“The owners of the company, in whose name the land is registered, have nonetheless been engaged by the Ministry to discuss the way forward on the future of your irregular settlement. They have  expressed interest to work with your beneficiaries to regularize the scheme on terms agreeable to both parties.”

Following the purported cancellation of the offer letters, legal practitioners representing the housing cooperatives wrote to the Ministry of Local Government arguing that its position was ‘unlawful, unreasonable, disproportionate and substantively and procedurally unfair’.