Economic sanctions are measures that are often used by trading partners – be they countries or international finance groups – to pressure particular countries on specific areas of democratic reform and regard. 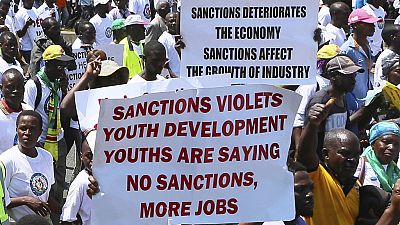 One African country that has been in the sanctions parameters of the news is Zimbabwe. The southern African country has in the last few years undertaken a series of efforts aimed at the lifting of western sanctions imposed against it since 2001.

In 2019 alone, the ruling ZANU-PF called for sanctions to be lifted early in the year. The government bemoaned the sanctions and declared a day of prayer and protest against sanctions. Harare also got regional bloc, SADC, to weigh in on the issue as did the African Union Commission chief shortly after SADC.

Despite opening up the political space, strengthening the rule of law, transparency, accountability & ramping up the war against corruption, crippling sanctions remain. Zimbabwe is simply held to disproportionate standards like no other country. Enough is enough. (1/3)

Sanctions, and their negative effect on FDI, have hampered every single sector of our economy. The claim they are targeted is simply not true when banks and entire sectors are cut off from funding. The average Zimbabwean pays the heaviest price. (2/3)

195 people are talking about this

The most recent development on the issue being when the Chinese Foreign Minister called for lifting of the sanctions he described as all but illegal.

“The unilateral sanctions imposed by some countries and organizations on Zimbabwe have no basis in international law and they violate the legitimate development rights and interests of Zimbabwe,” Wang Yi, told reporters in Harare.

“China fully supports the just aspirations of Zimbabwe and African countries to remove those sanctions on Zimbabwe,” he stressed at a press briefing with his Zimbabwean counterpart, Sibususo Moyo. Zimbabwe was the final stop of Yi’s five-nation tour of Africa. 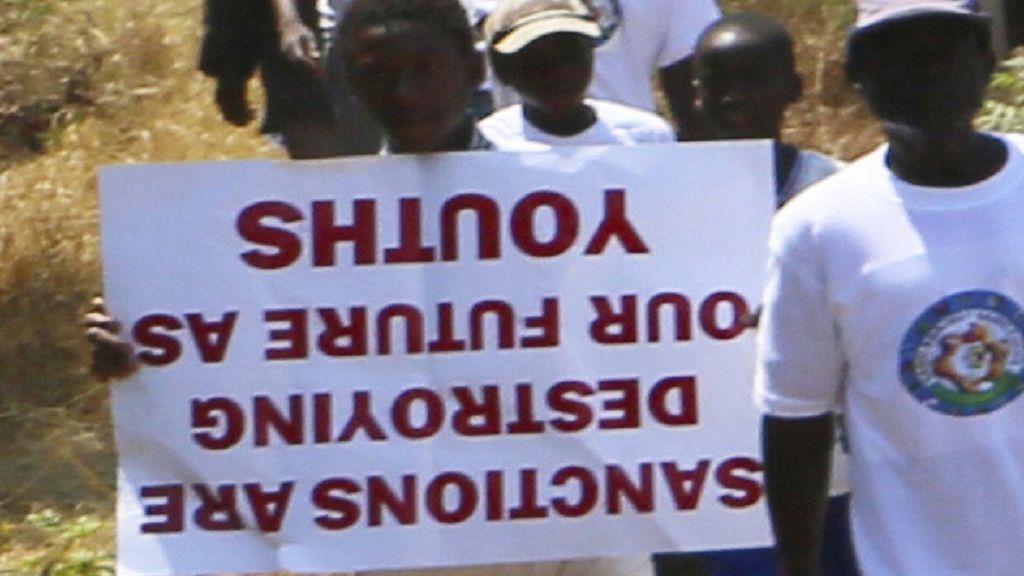 ‘Western’ sanctions and how EU usually gets wrongly listed

The use of “western” in describing the nature of the sanctions have more often than not been in reference to the United States, U.S. and the European Union, E.U. But the European Union has stressed that as a bloc, it did not have any sanctions against Zimbabwe.

The BBC in an October 2019 publication under its Reality Check section wrote: “The United States and the European Union (EU) have both maintained sanctions, citing a lack of progress in democratic and human rights reforms as well as restrictions on press freedom. They both target specific individuals and companies.”

Reuters news agency also carried the EU sanctions claim during the October 2019 protests. The report read in part: Mnangagwa, like Mugabe, blames the sanctions imposed by the United States and European Union since 2001 for the economic ills and says they are intended to remove his party from power.

“Every part and sector of our economy has been affected by these sanctions like a cancer,” Mnangagwa told a sparse crowd in Harare’s 60,000-seater national stadium. “Enough is enough, remove them. Remove these sanctions now!”

The E.U. ambassador in the country Tim Olkkonen in an interview with Trevor Ncube explained why the bloc did not have sanctions against Zimbabwe but clarified that they maintained restrictive measures on Zimbabwe principally the defense industry and on three high-profile individuals including former army chief turned veep Constantino Chiwenga.

The E.U. Ambassador to the African Union, A.U., Ranieri Sabatucci, in a tweet dispelled the issue of E.U. sanctions and reiterated the fact that the bloc was rather engaging Zimbabwe in the area of development assistance via grants.

“As reported many times, there are simply no EU economic sanction on Zimbabwe. On the contrary the EU is providing significant development assistance (grant not loans), he said.

Indeed over the course of 2019, the E.U. held two political dialogue meetings with the government in Harare. A statement from the second meeting held in November 2019 covered the essence of the meeting and efforts aimed at ameliorating the hydra-headed challenges Zimbabwe faced.

The exchanges centered on collaborative efforts in the areas of trade and investment, economic development, democratization, rule of law and good governance et cetera.

The EU support for Zimbabwe beyond the interaction with government also includes humanitarian aid and development support. The EU embassy in Zimbabwe reports of the following interventions: 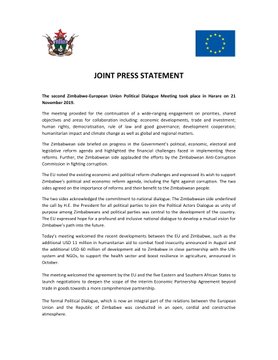 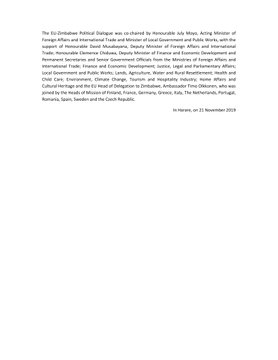 18 people are talking about this

The European External Action Service (EEAS) website on relations with Zimbabwe clarifies the issue of routinely reportedly sanctions. It states that relations between the two started in 1982, and it was governed by the ACP-EU Partnership Agreement, better known as the Cotonou Agreement.

The Agreement has been ratified by 79 countries from the African-Caribbean-Pacific regions (ACP), including Zimbabwe, and the EU and its 28 Member States.

The specific area of trade relations reads: “Contrary to popular belief, the EU has never imposed what is often described as ‘trade sanctions’ on Zimbabwe. Even during the period of the appropriate measures, Zimbabwe continued to benefit from the preferential access to the EU market provided under the Cotonou Agreement.

“In 2009, Zimbabwe, together with Madagascar, Mauritius, and Seychelles, signed an Economic Partnership Agreement (EPA), which was ratified and entered into force in May 2012.

“The agreement provided the signatories, including Zimbabwe, immediately with entirely duty-free, quota-free access to the EU market (consisting presently of 28 Member States). It also foresees a gradual liberalisation of 80% of EU imports by 2022.

“After the period of hyper-inflation in 2008, trade between the EU and Zimbabwe has picked up again. This is in particular true for the export of high added value agriculture products, while the export value of mining products has declined in recent years.”

Note must be taken that during EU-Zimbabwe government talks, all E.U. envoys in the country joined the head of mission at the meetings except for the United Kingdom envoy. The U.K. maintains some sanctions on some interests under the Zimbabwe Sanctions Guide.

According to the UK government website in a March 2019 notice, subject to the UK’s leaving of the E.U. (Brexit), the sanctions that like in the case of the U.S. is pushing for good governance and respect for rule of law will kick in.

The main areas are financial, trade and immigration sanctions which will extend from the state to specific persons.

“The Regulations provide that the Secretary of State may designate persons for the purposes of financial or immigration sanctions if they are, or have been, involved in the commission or a serious human rights violation or abuse, the repression of civil society or actions, policies or activities which undermine democracy or the rule of law in Zimbabwe.

“When these Regulations are in force a list of those persons designated under them and details of the sanctions in respect of which they have been designated, will be on GOV.UK.”

CFR on what economic sanctions are?

The Council for Foreign Relations, CFR, defines economic sanctions as the withdrawal of customary trade and financial relations for foreign- and security-policy purposes.

Sanctions may be comprehensive, prohibiting commercial activity with regard to an entire country, like the long-standing U.S. embargo of Cuba, or they may be targeted, blocking transactions by and with particular businesses, groups, or individuals.

Since 9/11, there has been a pronounced shift toward targeted or so-called smart sanctions, which aim to minimize the suffering of innocent civilians. 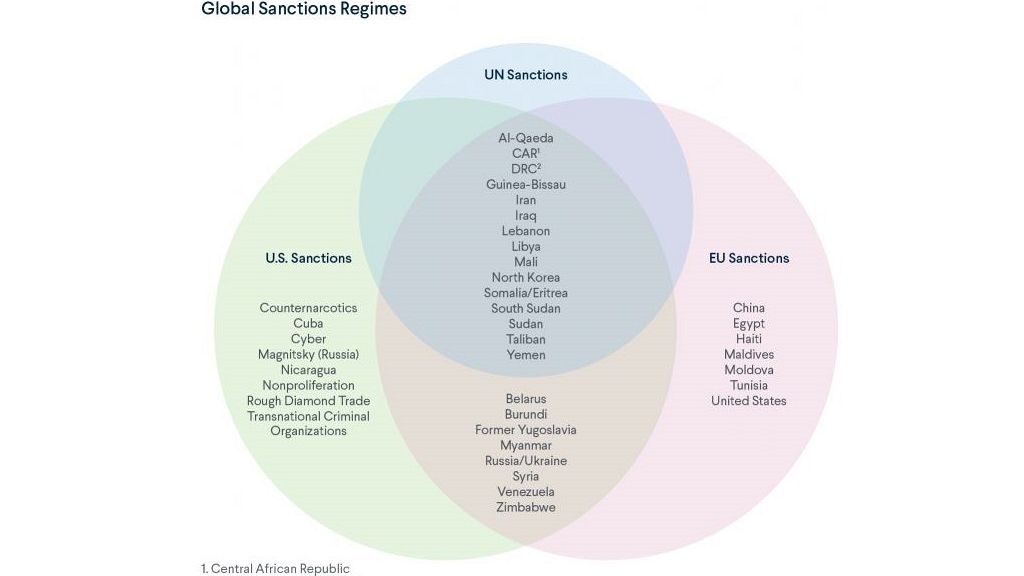