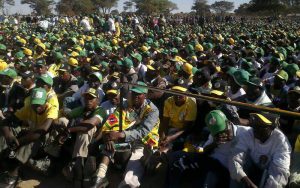 Ever since Zimbabwe attained her political independence from Britain on 18 April 1980, the only dominant power in the country has been the ZANU PF party, which has ruled with an iron-fist – thus, single-handedly determining the course of the nation, how the people should think, and what was wrong or right.

Such a one-party-state monopolization of the political, economic, and social space in the country, has, inevitably, led to the polarization of the people – as nearly half of the population has felt excluded from the national discourse and agenda, which has largely been determined by only one political party.

In fact, if the truth be told, ZANU PF itself – as a party not known for its democratic dispossession – has never consulted its own grassroots membership or support base, but rather has always employed a strict top-down dictatorial system, that has witnessed all major decisions being made by a very small grouping of its top brass – the politburo – whilst, the rest are expected to meekly obey.

As such, the course that Zimbabwe has charted over the past four decades can never be said to have been based on consensus, nor the mutual understanding of its citizenry – but, rather the result of closed door decisions by the ruling elite – usually not even numbering more than 50 individuals, at any given time, in a country of over 15 million.

Such an obviously untenable situation – only expected in medieval monarchies, and brutal dictatorships, in the mould of Adolf Hitler, Benito Mussolini, and Joseph Stalin – could have never been expected to unite the people of Zimbabwe under one common understanding of what exactly is our shared national agenda, or national interests – as arguably over ninety-five percent of the population has never been involved in its formulation.

Therefore, it would be foolhardy for the ruling establishment to then breath fire and brimstone, accusing all those not in alignment with their narrow and selfish vision, of being unpatriotic – even going further as to labeling them, ‘sellouts’, and ‘puppets of foreign powers’, the former being a very dangerous term, used during the country’s liberation war, to justify the malicious torture, and gruesome murder of all those perceived to have been against the nationalist movement, particularly ZANU PF.

Today, ask any Zimbabwean what exactly is meant by ‘patriotism’, and what defines a ‘patriotic’ person, and most will not have any plausible response, except to say that it would be anyone who blindly subscribes  to the prevailing views and policies of the administration – and, on the other hand, anyone who questions or resists, is automatically regarded as ‘unpatriotic’, and therefore, fair game for scorn, abuse, and downright repression and brutality.

A case in point is the current advocacy for the enactment of a so-called ‘Patriot Act’ – which, seeks to criminalize anyone who apparently calls for the imposition of sanctions against the country, that ostensibly cripple the economy, and cause untold suffering of the people of Zimbabwe.

This would have been perfectly agreeable and understandable, had there been a consensus on exactly what these ‘sanctions’ truly were – yet, the Zimbabwe regime has pathetically failed to articulate this point, rather choosing to proffer largely unsubstantiated and generalized references to the continued restrictive measures imposed by the United States of America (USA), and the European Union (EU) in the early 2000s, targeted at only 142 top ruling party and government officials on accusations of heinous human rights abuses, wanton election rigging, and unfettered corruption.

Indeed, these accusations hold water, as the people of Zimbabwe, especially those expressing dissenting voices – particularly, members of the main opposition Movement for Democratic Change (MDC) party, labour and civil rights activists, and the general populace – have been at the receiving end of some of the most brazen and barbaric brutality – including suppression of any constitutionally-enshrined peaceful demonstrations, beatings up, alleged abductions and forced disappearances, and the cold-hearted murder of hundreds of activists, the most recent being the gunning down of scores of unarmed protesters and bystanders by security forces in August 2018 and January 2019 – without anyone ever being brought to book for these savage offences.

Similarly, besides these odious acts having been adequately documented, and the August 2018 killings substantiated by a commission of inquiry led by reputable former South African president Kgalema Mothlante, the regime has proceeded to heartlessly politicize such life-and-death issues as food aid – affecting over half the country’s population that faces unparalleled starvation – which, the United Nations (UN) Special Rapporteur on the Right to Food recently highlighted, adding that food shortages in Zimbabwe were man-made.

Furthermore, any person with an ounce of economic understanding can tell that this country’s people are suffering due to the government’s policy distortions, inconsistencies, and inaptitude – coupled by unrestrained corruption, largely driven by cartels aligned to the ruling elite, who are permitted to operate with impunity – a fact, even brought up by ZANU PF’s own youth leaders, who were subsequently suspended for exposing these nefarious activities.

However, the unapologetic establishment has never been able to convincingly prove beyond any reason doubt, with incontrovertible and irrefutable evidence – beyond the usual generalizations and vagues accusations – that, these restrictive measures were not only unjustified, but also affected the country’s economy, and as such, were responsible for the untold suffering being faced by the vast majority of the citizenry.

If anything, the ruling elite has sought, instead, to vilify and criminalize all those it accuses of instigating and inviting these targeted sanctions – proven by the increasing advocacy for the enactment of the so-called ‘Patriot Act’.

If those in power adamantly proceed with such a tyrannical act – which, just further exposes their insatiable greed for power, and disdain for accountability to the citizenry – this could prove to be the proverbial ‘silver lining around the cloud’, as this would afford civil rights activists the wonderful opportunity to challenge this legislation in a competent court of law, whereby the regime would be forced to finally prove whether these targeted sanctions truly had the adverse economic effect – a story that they have always been feeding the nation for nearly two decades.

If my analysis serves me right, the regime would be shooting itself in the foot, should they decide to proceed with such a gross miscalculation – as their lies to the nation of Zimbabwe, and the international community, would finally be exposed, once and for all.

The only way forward for this administration is to embrace every Zimbabwean – as an equal partner – in charting the way forward as one nation, and one people – placing the upholding for human rights and dignity, and respecting the sanctity of the constitution, above all else.

Only then can we have one clear vision as to our collective national agenda, and national interests – failure of which, we will continue to grow apart, and disintegrate as a nation.

Only in incorporating everyone can we finally clearly define ‘patriotism’.