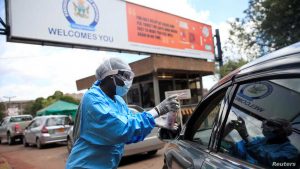 A health worker screens and sanitises visitors to prevent the spread of coronavirus disease (COVID-19) outside a hospital in Harare, Zimbabwe March 26, 2020. REUTERS/Philimon Bulawayo

On Wednesday 29 April 2020 (day 31), it was 5 days to go to the end of a cumulative 35-day National Lockdown declared by President Mnangagwa, initially for 21 days but extended for another 14 days to 3 May 2020. The extension of the lockdown was followed by the gazetting of Statutory Instrument (SI) 2020-094 Public Health (COVID-19 Prevention, Containment and Treatment) (National Lockdown) (Amendment) Order, 2020 on 21 April 2020.On day 31 of the lockdown, official statistics by the Ministry of Health and Child Care indicated that COVID-19 confirmed cases increased to forty (40), whilst the number of deaths relating to COVID-19 remained at four (4). The total number of recoveries remained at five (5). On 29 April, a total of 355 tests were conducted, increasing the cumulative tests of suspected COVID-19 cases to seven thousand six hundred and forty-two (7 642), of which seven thousand six hundred and two (7 602) were negative.

3.         General Atmosphere
In Warren Park, Harare City Council demolished vending stalls and other illegal structures at Mutomba Shopping and Mereki Shopping Centres. Similar reports of demolitions of vending stalls were also reported from Kambuzuma where other structures deemed to be illegal were also destroyed.

In Mudzi and in Makoni, the Ministry of Public Service, Labour and Social Welfare distributed food aid in the form of maize and mealie meal as part of the government’s COVID-19 relief programme. It was reported that community members were crowded and not observing social distancing during the food distribution process at both locations.

In Chipinge, long queues were observed at N Richards, TM and OK supermarkets. Community members were not exercising social distancing in the queues. However, OK supermarket employees were checking the temperature of customers before one could be allowed to get into the shop. At most of the shops in Chipinge, sanitizing hands was a prerequisite before entering the shop.

In Mt Darwin, it was reported that the police officers were demanding bribes from people defying the lockdown. It was reported that a shop owner whose shop had remained open after 3 pm was asked to pay a bribe of ZWL500 or be taken to the police station for processing. It is not clear how the matter was concluded, and the Forum continues to monitor this incident.

In Muzarabani, prices of basic commodities continue to increase unabated whilst other shop owners are now charging products in foreign currency only. It was also reported that the World Food Program (WFP) and the Red Cross distributed food aid consisting of 50kg maize, 5 litres cooking oil and 3kg beans for a family of five (5).

4.         Assaults
In Mkoba Gweru, it was reported that police officers assaulted seven (7) people with baton sticks at Choppies Supermarket for failure to maintain the required social distance. It was reported that community members were waiting in a queue for mealie meal at Choppies Supermarket when police officers indiscriminately assaulted people for allegedly breaching the required social distance.

In Dangamvura in Mutare, it was reported that soldiers have started patrolling at night in high-density suburbs after receiving information that community members are conducting various businesses and drinking alcohol in groups after 7 pm. Five (5) people accused of loitering and defying the lockdown at  Hob House were assaulted with sjamboks by soldiers during the night patrol.

5.         Summary of violations
The table below summarises human rights violations documented by the Forum Secretariat and Forum Members from 30 March 2020 to 26 April 2020.

7.         Court Update
Justice Munangati-Manongwa of the High Court of Harare heard an application filed by the Zimbabwe Lawyers for Human Rights on behalf of the Chitungwiza Residents Trust and other vendors in Epworth. Informal traders and residents were seeking an interdict stopping the local and central government from demolishing their vending stalls and tuckshops. The Judge ordered these demolitions to be stopped in Chitungwiza and Epworth as they are unlawful and do not follow proper procedures.8. Institutional reforms: Policing
Since the lockdown has been extended, there are important lessons and developments which should be adopted from the first phase. There is an urgent need for the government to comply with all court orders that were issued by the High Court concerning the rights of citizens, under the lockdown and beyond.

Furthermore, the Forum take note of the unprecedented recent demolitions of the vendor stalls in Mbare, Machipisa, Warren Park, High Field and Kambuzuma. Such demolitions have also happened in other areas of the country including Gweru, Marondera, Mutare and Bulawayo. The deomlitions are reminiscent of Operation Murambatsvina which disrupted livelihoods across the country in 2005, with its effects still being felt to date.
Finally, there is need to ensure accountability and redress in respect of gross human rights violations that continue to take place during the lockdown.