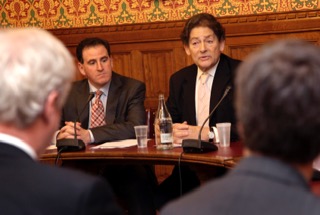 Lord Lawson (right) with Dr Benny Peiser of the GWPF

Zimbabwe can set an example to the world in domestic power supply, according to the head of a London think tank.

Dr Benny Peiser who leads the Global Warming Policy Foundation (GWPF) said the building of Lake Kariba in the 1950s — still the world’s largest dam — and the coal-fired power station at Hwange “are cases where Africa looked after itself”.

Dr Peiser was speaking on Monday 29 June at the start of the Energy for Africa week.

“Zimbabwe is now in a dire state economically due to mismanagement and a terrible record on human rights,” he said, “but Kariba is still there and the power stations near the coal fields are being re-tooled.”

Dr Peiser told The Zimbabwean it was important for donors and the World Bank to support local solutions rather than imposing what he called “a new form of colonialism”.

“More than 600 million Africans lack something so basic as electricity and yet we have donors denying funds for a power plant because it uses fossil fuel. Imagine that in a country like Tanzania with four billion tons of coal in the ground.”

In recent years, Nigeria, Tanzania, Mozambique, Botswana and Zimbabwe have all voiced criticism of aid groups over what they say is a dictatorial policy on energy.

“Electricity is a human right,” Dr Peiser said. “We accept that in Europe, the US, Australia, but somehow Africans should get by on diesel generators, or fire wood when the winter cold sets in.”

He said clean technology for coal has seen countries like India and China using it increasingly to reduce air pollution.

The GWPF was established by Lord Nigel Lawson who in the 1980s served as Chancellor of the Exchequer in charge of Margaret Thatcher’s reboot of the British economy.

Dr Peiser said the GWPF had no preference for solar, wind, hydro or fossil fuel, and that every country had a right to make its own choice.

“There is a new colonialism just as oppressive as the original,” he said. “Some in the environmental movement believe they can sit in London, New York or Paris with the comforts of modern life and dictate to Africa how they should generate power.”

The week-long focus on energy in Africa will include release of videos and discussion papers on how to lift the supply of electricity across the continent.

Ethiopia has embarked on a dam-building project for hydro power while South Africa, Botswana and Zimbabwe get almost all their energy from coal. Kenya and Uganda are installing solar plants in arid regions.

Dr Peiser said industry was “all but impossible” with electricity and this lay at the heart of unemployment.

“The loss of hope that comes with poverty drives young people to join militia and even terror groups, or to emigrate, with thousands drowning or being taking hostage in their desperate attempt to reach Europe.”

Wits University in Johannesburg has one of the world’s most advanced clean-coal laboratories.

“If we can burn fossil fuel cleanly there is no reason not to use it,” Dr Peiser said. “But that decision must be taken by sovereign states in Africa and Asia, and not be imposed from outside.

“The colonial mentality of the World Bank and in the donor industry needs to end and it needs to end now,” he said.