HARARE – President Emmerson Mnangagwa on Wednesday vowed to crush planned opposition protests on Friday, claiming that the opposition was planning an “insurrection” against his regime. 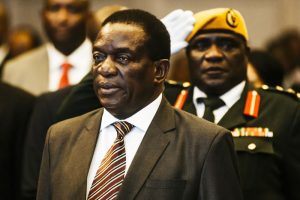 Mnangagwa labelled organisers of the protests “terrorists”, echoing a label attached on the main opposition MDC Alliance by his Zanu PF party’s spokesman on Monday.

MDC Alliance deputy president Tendai Biti told journalists in Harare that Mnangagwa’s plan was to “liquidate” their party as his government comes under pressure over a deepening economic crisis and the erosion of salaries by hyperinflation, which was over 700 percent in June.

Police last week arrested Jacob Ngarivhume, the main organiser of the July 31 protest and journalist Hopewell Chin’ono, accusing them of inciting violence by agitating for the protests on Twitter. The two men deny the charges.

Speaking at a meeting of the Zanu PF Politburo in Harare, Mnangagwa said: “This meeting is being held against the backdrop of a threat to our democracy, constitutionalism, rule of law, independence and nationhood from terrorists masquerading as opposition parties and activists.

“It must never be in doubt that the objective of these rogue Zimbabweans acting in cahoots with foreign appendages, supporters and financiers is to stage an insurrection and overthrow our democratically elected government.”

Citing the Covid-19 pandemic, Mnangagwa said the planned demonstrations were “a threat to the safety and security of our people, and people’s right to life.”

He added: “The planned insurrection is connected to the violence and destabilisation that opposition elements have fomented since 2018, including the August 1, 2018, violence and the January 2019 disturbances which led to the loss of lives.

“Emboldened and inspired by the upcoming Heroes Day and Defence Forces Day commemorations, Zanu PF as the people’s party will never ever stand by and allow our people to be put in harm’s way. We will equally defend our independence and sovereignty to the letter, and not betray the fallen heroes and heroines who paid the supreme sacrifice for the freedoms we enjoy today.”

He warned organisers of the “ill-fated” protests that “security services will be vigilant and on high alert to appropriately respond to their shenanigans”, while urging Zimbabweans to “shun these malcontents and reject their divisive, ruinous plan.”

Rejecting predictions of an economic implosion by his political rivals and economists, Mnangagwa claimed that his government “continues to make notable strides in fulfilling our election promises.”

Biti, addressing a news conference in Harare, said the MDC Alliance supported the right of citizens to protest, accusing Mnangagwa of using Covid-19 to criminalise criticism of his regime.

“We’re calling for the restoration of the constitution as a matter of urgency. Covid-19 has allowed this regime through the back door to impose a de facto state of emergency. Everyone’s rights have been suspended,” Biti said.

“We support the rights of the citizens who have organised July 31, 2020. We support their constitutional right to embark on a peaceful, constitutional protest against the regime codified in section 59 of the constitution of Zimbabwe. We reject the fascist response by the regime. A responsible government would have asked for dialogue with the organisers, but this regime is unique… it is violent and impervious to logic.”

Biti accused Mnangagwa and Zanu PF of “attempts to convert July 31 into a bloodletting affair”, insisting that there was nothing that the planners had said which intimated that they wanted a violent demonstration.

The MDC Alliance says scores of its activists have been abducted and beaten by state security agents in recent days, while dozens of others including unionists have been forced to flee their homes to escape a crackdown to suppress the protests.

“They’re being hounded as if they are common criminals. They’re all in hiding, being hounded by a predatory, thugocratic state led by Emmerson Mnangagwa … We take great exception to the description of our party as a terrorist organisation” Biti said.