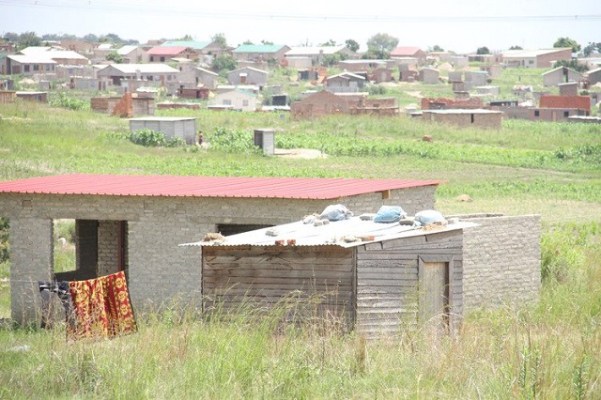 The two, Joseph Chari and Timothy Rungwenya who are reportedly linked to a company called Greenview, had been parceling out land on the wetland area and reports indicate that over 100 desperate home seekers were fleeced of their hard earned cash.

The two alleged land barons were selling the stands despite the fact that the area is council land.

After the arrest of the two, council demolished structures that had been built on the area.

Investigations into the Westlea issue reveal that the land barons who had invaded the wetland area were working in cahoots with powerful council officials who were giving them the green light to sell housing stands.

“The reason why the land barons proceeded to sell the stands is that they felt used and that some council officials who were part of their syndicate were trying to sideline them. But there is still a clique which is still working with the land barons as has always been the norm in many areas,” said a source.

“Those who have invaded the Westlea wetland are a syndicate that is bitter with council for hijacking the wetland from them. The ongoing arrests at council have also been motivated by some of these issues and that is when those who are bitter come up with evidence to nail their erstwhile enemies.

“They (the land barons) are bitter with council because they claim they were used and dumped. The scenario in Westlea is just a clash of different groupings fighting to get a piece of the cake. It is not about preserving that wetland area,” said Kuleya.

That the land barons have some political muscle or link of some sort is corroborated by the fact that when Chari and Rungwenya were arrested last week, it was for the second time. How they continue to defy directives boggles the mind.

The two have previously clashed with council over the same wetland area leading to their arrest yet they continued selling stands on the area knowing fully well that the place was council land.

Council Spokesperson, Michael Chideme confirmed that council was having a difficult time dealing with the Westlea land barons.

“Yes it is true that the two were arrested by municipal police. This is not the first time that they have been arrested. They were also arrested last year over the same piece of land which belongs to council,” said Chideme.

Residents associations in Harare are on record bemoaning that land barons are working in cahoots with powerful politicians and council officials hence they are mostly untouchable.

In Harare South, residents claim the area’s legislator; Tongai Mnangagwa and the local police are conniving with land barons to invade open spaces in the area.

The Harare South Residents have since made a passionate appeal to President Emmerson Mnangagwa to act on the issue.

The level with which land barons defy the law, including court outcomes is quite shocking.

In Hillside, residents are fighting to stop former Minister, Petronella Kagonye from invading the Hillside Park which is a wetland area.

Kagonye, through her firm, Glorious All Time Functions is seeking to build a wedding venue on the park.

She was stopped from developing on the area following  a High Court ruling and went on to lose an appeal with the Supreme Court as well.

Despite the Supreme Court ruling, Kagonye has continued to develop on the area in directive defiance of the court order.

Chitungwiza is also one of the areas that has probably recorded the highest number of cases of land invasions by land barons.

Speaking at a meeting hosted by the Harare Wetlands Trust (HWT) in July, the Deputy Minister of Local Government, Marian Chombo expressed concern over land barons in Chitungwiza and singled out former Councilor, Fredrick Mabamba who has largely been blamed for land invasions in the area.

The towns’ Mayor, Lovemore Maiko is on record making a passionate appeal to law enforcement agents to intervene and stop continuous land invasions in the area.