The Institute of Chartered Secretaries and Administrators in Zimbabwe has launched a Women in Governance and Accounting (WIGA) Chapter. It launched the chapter on Friday at the end of its annual conference in Nyanga. 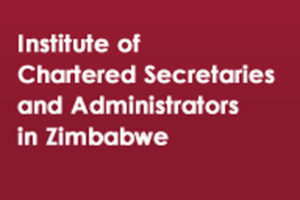 The chapter’s inaugural chairperson, Dr Avilla Goba, described the formation of the chapter as a historic moment.

“Our institute is joining many progressive organisations and associations the world over that have created a chapter dedicated to the advancement and emancipation of women in strategic positions,” she said.

“As women in the governance and accounting profession, it has become clear and critical that we must position ourselves for the same rights and privileges as our male counterparts.”

She said huge contributions had been made by women who have excelled in key decision making positions over the years, not only within the governance and accounting profession but in other socio-economic spheres.

She pointed out that African society in general had been patriarchal, subtly promoting the advancement and progression of males over their female counterparts.

“There has been a gradual change over the years. However, cultural challenges and norms have been an impediment to progress,” she said.

“As women in governance and accounting we want to break this glass ceiling by coming together and sharing insights and experiences to position ourselves for leadership,” she said.

She said members of WIGA expected to interact with professional women in governance and accounting from diverse professional disciplines.

Insurance and Pensions Commission commissioner Grace Muradzikwa, who was guest of honour at the launch, said she has long believed that equality for women could not be achieved without women assuming leadership positions in more than a token manner in all sectors of the economy.

She said more women than ever before had been taking up high political office. Since 2010 no less than 56 women had been elected political leaders of their nations. Currently there were 21 heads of state or government who were women, only a few compared to the number of countries there are.

Mrs Muradzikwa said she wanted to give credit to the government for its gender policy and taking steps to implement the quota system stipulated in the country’s Constitution. The creation of the Gender Commission provided for in the Constitution was another positive development, she said.

The Constitution provided for equal participation by women and men in the administration of public sector entities. Currently 35 percent of senators and 25 percent of Cabinet Ministers were women, she said.

The private sector, she said, was still far from embracing gender diversity at the top of the corporate ladder. Historically boards in Zimbabwe had been dominated by men, despite overwhelming evidence showing the positive contributions women can make to societal decision-making.

“I want to challenge boards in our corporate sector to embrace gender diversity. Our understanding of leadership has to shift from the macho mentality to a diversified and multifaceted leadership model more fitted for globalisation, the digital age and the new normal,” she said.

She urged women to retain their femininity and not try to be men. She suggested women had qualities that would enhance the effectiveness of boards.

“Women, even when you are on a board, don’t try to be men. Let’s keep our femininity,” she said.

She said major challenge women faced was lack of mentoring. She was delighted, she said, that WIGA would provide opportunities for successful women to mentor and coach other women and prepare them to take up positions of leadership.

“I believe that equipping yourself and being expert in whatever you do is vital. We need to read. We have to work more than men to be noticed,” she said, adding that it was important to have an appreciation of all disciplines.

“There is need for us, as women, to create strong networks and use them to our advantage,” she said.

She urged women to be principled and women of integrity and to choose their friends carefully.

“Learn from your failures. I believe we learn more from failures than from successes,” she said.

She said there were few men who wanted to see women being successful.

“Men and their daughters are inseparable but when it comes to uplifting women its another matter,” she said.

She said she had no doubt that WIGA would provide a platform for women leadership development and would attract women from various disciplines in business and entrepreneurship.