BULAWAYO, ZIMBABWE (IPS) - Once a week a tonnage of fresh charcoal is dropped off at Sibangani Tshobe’s rugged, pit-stop stall by a hired, battered old Bedford lorry. Small, makeshift trolleys — nicknamed Scania’s — quickly cart off small loads and disappear into Old Pumula, the oldest suburb in the country’s second-largest city of Bulawayo. 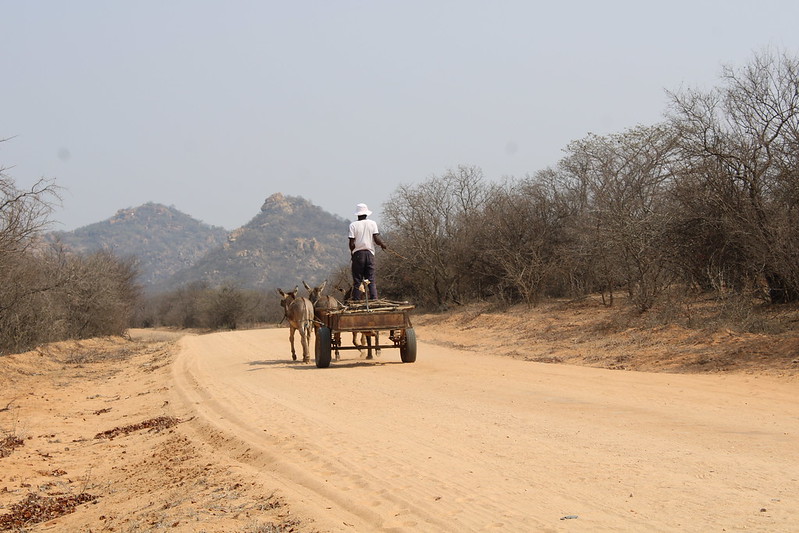 Charcoal sold in urban centres is usually illegally imported from Mozambique and Zambia, where charcoal has traditionally been produced. But this energy source is now being produced in Muzarabani District in Mashonaland Central Province close to the border with Mozambique, according to the Forestry Commission. Credit: Busani Bafana/IPS

Electricity blackouts have temporarily stopped in Zimbabwe, but higher power costs and an occasional cold spell still offer Tshobe a chance to make a few dollars.

“I sell a bag of charcoal for $7 and it is good business for me,” Tshobe tells IPS, indicating to a 50 kg polythene bag from other traders that is split into smaller bundles that he sells for $1.

High costs of electricity for cash-strapped Zimbabweans — the country has a poverty rate of just over 38 percent, according to the World Bank —  means that the demand for firewood for cooking, lighting and heating has increased.

And so too has the destruction of Zimbabwe’s fragile forests.

“With the high cost of electricity what does one do? This is a means to fend for my family. I am aware our business means destroying trees but we have to live,” Tshobe says.

Each year, Zimbabwe loses about 60 million trees — some 33,000 hectares of forests — thanks to illegal deforestation, according to the the Forestry Commission, a body mandated to protect state forests.

“Charcoal is happening and is a worrying trend necessitated by the energy challenges the country is facing. Yes, a few months back we had an issue of no electricity, so charcoal was coming in handy for cooking, especially in urban areas. Now, in most parts, electricity is available but beyond the reach of many due to the high tariffs,” Makoto tells IPS.

Charcoal – favoured for burning hotter and longer than wood – is made from heating wood without oxygen. The practice is taking root across swathes of the country, dominated by native forest hardwoods such as the mopane hardwood species (Copaifera mopane J), Makoto says.

Charcoal sold in urban centres is usually illegally imported from Mozambique and Zambia, where charcoal has traditionally been produced. But this energy source is now being produced in Muzarabani District in Mashonaland Central Province close to the border with Mozambique, according to the Forestry Commission. The Midlands province, Mashonaland West Province and Matabeleland North province were also hot spots for charcoal production, says Makoto.

“We have been carrying out raids and confiscating the charcoal but our problem is that we are aware that even if we confiscate the charcoal people still go to those areas and cut down more trees and produce charcoal,” she says.

Last year, more than 30 people were arrested and fined for trading in charcoal with 1,9 tonnes of charcoal confiscated.

This year, more than 1,000 bags of charcoals were confiscated and 10 people arrested and charged for making and selling charcoal.

“We need a lasting solution that can completely eliminate charcoal making in the country. Maybe crafting new laws to directly address the issue of charcoal production in Zimbabwe would help.”

The production, marketing and even consumption of charcoal are crimes, unless one is buying charcoal made from exotic trees, according to Abednego Marufu, the Forestry Commission’s General Manager. Marufu says that there was an exception for timber companies who harvested exotic tree species, such as wattle, for charcoal making.

The Forestry Commission is pushing for tighter laws to curb the practice, proposing a mandatory jail term, instead of fines, which are proving not sufficient deterrent. Currently anyone caught selling firewood and charcoal can receive a Level 7 fine for $59 or a year in jail.

“The Level 7 fine for people in communal areas is deterrent enough what is required by us is enforcement and we are working with the Zimbabwe Republic Police and the Rural District Councils and the Environmental Management Agency to curb this activity,” Marufu says.

“We envisage a mandatory jail term rather than optional fines so that people can go to jail for three months. We feel it will be painful enough for people to understand that environmental crimes are serious.”

However, stricter fines are not necessarily the answer to issue, some activists note.

“The constant rise of electricity is unsustainable not just for consumers who are poor and unemployed but also for businesses because electricity is a key component of both the domestic and household economy,” Effie Ncube, a civil rights activist, tells IPS. He adds that high costs of electricity are also pushing up the costs of basic goods and services.

“Energy is a really a sensitive issue,” Machemedza tells IPS by telephone. “It is high time the government comes up with alternative sources of energy and invites other players into the energy sector.  The cost of electricity today has gone beyond the reach of not only the ordinary consumers but even the middle class. Since September last year we have seen more than three increases in electricity and that is worrying.”

Wood fuels represent significant economic value in many countries, accounting for approximately $ 6 billion for the whole of Africa, according to the United Nations’ Food and Agriculture Organisation (FAO). More than $1 billion of this amount was made up by charcoal.

“Zimbabwe needs to invest in wide scale alternative energy sources like wind and solar so that people have access to affordable and clean energy at a time when firewood and charcoal are widely use but these have a serious environmental impact,” says Ncube.