MASVINGO – Zanu PF is sending wrong signals to the public about Covid-19 by declaring lockdowns that the party itself violates in broad daylight. 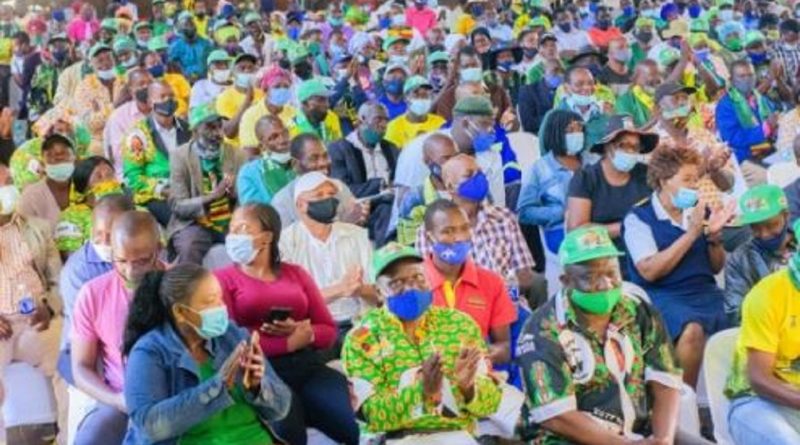 The majority of Zimbabweans now believe that there is no Covid-19 as senior ruling party officials hold rallies every day. They believe that Covid-19 is just a decoy as a result many churches are back to business, holding large gatherings.

The opposition MDC has not been left out as its structures are also back to business and holding meetings in the bushes to avoid detection by the Police. Mushikashikas and combis are overloaded and operators pay Police at roadblocks to avoid arrest.

Funerals have not changed as the maximum of 30 mourners is not being observed.

The Mirror was on Saturday night inundated by calls from Mpadawana residents who complained against Zanu PF Gutu District Co-ordinating Committee chairperson Brian Munyoro holding a meeting of more than 200 supporters at Hwiru Primary School in Gutu.

The meeting lasted four hours from 6pm to 10pm and supporters were neither wearing masks or observing social distance, according to sources.

Police Spokesperson Kudakwashe Dewa said he was not aware of the rally and said that he was going to look into the matter.

Munyoro switched off his mobile phone when contacted for a comment by The Mirror.

“I am out of office and not aware of the rally. I will look into the matter once I am back in office,” said Dhewa.

A source told The Mirror that Munyoro and Samatanga put together the gathering in order to distribute maize meal donated by Senator Lovemore Matuke.

“Zanu PF has total disregard for the populace. How can the party hold a night meeting when curfew begins at 6pm? We can only raise alarm on WhatsApp because there is nothing we can do,” said a villager who spoke to The Mirror on condition of anonymity. https://masvingomirror.com