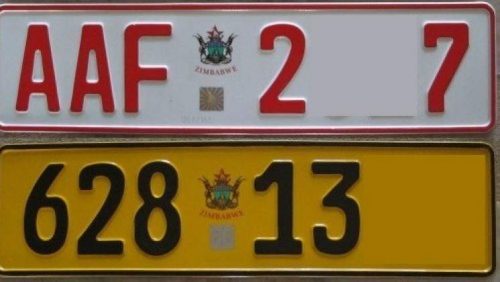 He said it will be mandatory by December for every vehicle to have number plates to reduce cases of hit-and-run by unregistered vehicles.

Mhona made the remarks while addressing Parliament on the road carnage recently.

He said the country was set to receive about 151 000 pairs of number places in December and build a supply of over 18 months. Said Mhona:

… we received adequate stocks of number plates this past month.

According to the information that we have, we have about 35 000 unregistered vehicles and we have received 37 000 pairs of numbers.

It means that gap is going to be bridged. However, at the end of October, we are going to receive 151 500 and the consumption of number plates should just give you information.

He said the country’s daily demand for number plates was 3 000, translating to 90 000 per month. Said Mhona:

This is what we import after the advent of the statutory instrument that banned cars above 10 years.

It means by the end of October, if we then receive our batch for 151 000 for those who can do their mathematics, it means we will have almost close to 18 months’ adequate supply of number plates.

Mhona also revealed that the country experienced over 7 984 road accidents in which 282 people lost their lives and 1 373 got injured in the first quarter of the year.

He said his ministry had come up with a strategy to end road carnage which will be rolled out soon.