With COVID-19 vaccine hesitancy still prevalent across Zimbabwe, the gov't resorted to a mandatory vaccination policy. But will it work?

While Zimbabwe has had a smooth COVID-19 vaccination rollout programme, resistance among citizens has led to low uptake, prompting the government to force the vaccine on citizens. 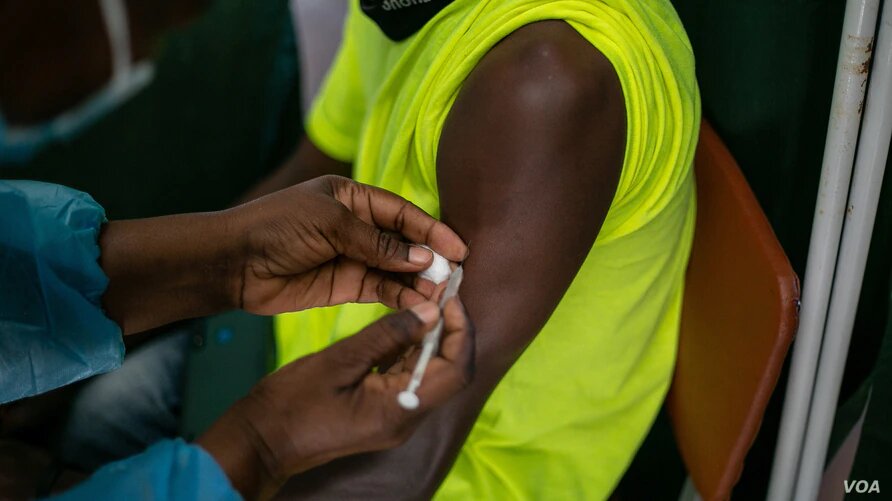 A Zimbabwean receives a COVID-19 vaccine jab at Wilkins Hospital – Zimbabwe’s main vaccination center in Harare on May 12, 2021 when things were still on course. Then shortages began. (Columbus Mavhunga/VOA)

Victor, a 29-year old soldier, has not been going to work lately. He is not on leave, and neither is he sure about the future of his job. He is sitting at home because he is one of the thousands of military men that have been barred from entering army barracks because they have not been vaccinated against COVID-19.

While Victor is not willing to disclose his personal reasons for refusing the jab, he is sure of one thing: his employer is not going to be able to arm-twist him to take the vaccine.

“It’s a no-no to me, and that is my choice, and why should that choice be taken away from me?” Victor told FairPlanet in Zimbabwe’s capital, Harare.

Elsewhere in Gokwe, some 450 km southwest of Harare, Zexie Mandizvidza, a 64-year old farmer has been trying to pursue payment for his 18 bales of cotton that have remained outstanding since he delivered them to the Cotton Company of Zimbabwe (Cottco) 14 months ago.

However, recently, he has not been able to enter the State-run firm’s premises because in order to do so he now needs to show proof of a COVID-19 vaccination. A devout member of a local religious sect that does not believe in use of modern medicines, Mandizvidza is stranded. But he is not desperate.

“There is nothing that I can do for now,” Mandizvidza told FairPlanet in a telephone interview. “If the Lord allows that I don’t get the payment because I am not vaccinated, then let it be so,” said the villager, who has another 14 bales of cotton from this year’s harvest that he says he doesn’t know what to do with.

Cottco, a government-controlled firm, is the only one allowed to purchase cotton from farmers in the country.

In Bulawayo, the country’s second largest city, the announcement that vaccination would be a condition for a getting vendor’s operating licences when the lockdown is finally lifted triggered a sudden upsurge of vaccine demand at vaccination centres in the city – something not unexpected in a country in which the unemployment rate is over 90 percent and vending is therefore a source of livelihood for many.

All these people share one thing in common: had they been given the option they would not get the vaccine for various reasons and/or excuses that range from religious beliefs and scepticism to plain ignorance.

But that choice is increasingly being taken away, as the government seeks to push through vaccines in order to reach the herd immunity necessary to manage the COVID-19 pandemic.

For several months after the vaccination rollout began in Zimbabwe in February, it was done on a voluntary basis. The government’s target for herd immunity was 60 percent of the country’s 15 million-plus population.

But as of late July, a paltry 600,000 people – just over five percent of the ten million figure targeted for vaccination in the 10 months until December – had been fully vaccinated. Among the government’s 250,000 workers, the vaccine uptake rate was just ten percent. The problem has not been a shortage of doses, but rather vaccine resistance among the citizens.

After months of persuasion and education failed to produce the desired response, on 20 July Zimbabwe’s Information Minister, Monica Mutsvangwa, announced a Cabinet decision to make vaccination compulsory for all government employees, an order that caught people like Victor offside.

This decision came in addition to the one making the vaccine compulsory for farmers wanting to sell their produce at government controlled markets and vendors seeking to sell their wares in the post-lockdown period. Such moves effectively cut the income for anyone who is not vaccinated.

The change of the vaccination programme from voluntary to compulsory has worried many. The Zimbabwe Congress of Trade Unions (ZCTU), the umbrella body of worker unions, has approached the High Court to challenge the practice’s legality.

ZCTU President Peter Mutasa said that while the government has the duty to regulate citizens, especially during public health crises such as the current global pandemic, it should do so within the confines of the law.

“We believe that both government and private sector employers, who are embarking on arbitrary practices that discriminate against workers, are doing so unlawfully,” Mutasa said. “The constitution of this country protects workers against unfair discrimination, unreasonable and unjustifiable discrimination. This is in terms of Section 56.  The constitution of this country also protects the rights of workers to their opinion and to their conscience including religious beliefs, political opinions and opinions towards the vaccination programme.”

Marko Shoko, a human rights activist, also petitioned Parliament to act on the matter, arguing that the compulsory vaccination programme was unlawful.

“Section 35 of the Public Health Act provides that no health service / treatment shall be provided to a person without consent,” reads Shoko’s petition. “For the cause to be valid it must be voluntary and informed and the person consenting must have the capacity to make the decision.”

Ndabaningi Mangwana, a spokesperson of the Zimbabwe government, insists that the route taken by the government is not unusual in times of crises.

“The US Supreme Court once said, ‘sometimes individual interests might have to yield to state laws that endeavour to protect the health of everybody’,” tweeted Mangwana after mandatory vaccination had been ordered for government workers.

“In the US, certain vaccinations are school-mandatory […] 11 countries in Europe make childhood vaccinations mandatory,” he added.

While local anti-vaxxers are fuming, with court challenges and petitions are flying thick and fast, push and pull factors have seen an increase in vaccine uptake. By the end of July, some two weeks into the compulsory vaccination programme, the number of fully vaccinated people had jumped to 830,000, while 1.7 million more had received their first dose of the vaccine.

The period coincided with panic caused by an upsurge in the number of infections and deaths as the third wave of the pandemic – driven by the Delta variant of the virus – turned out to be more deadly.

This has seen long queues at vaccination centres that, until the onset of the third wave, hardly served anyone at all.

The government has also roped in the country’s feared army and traditional leaders in the rural areas, where more than 70 percent of the country’s population lives, to foist the doses on citizens.

However, as more people find themselves under undue pressure to get vaccinated, there has also been an increase in the cases of fake vaccination certificates, with health sector workers playing a central role in the scams.

The Zimbabwe Democracy Institute (ZDI), a local research think-tank, noted in its report from July that mandatory vaccination would not work in Zimbabwe.

“Mandatory vaccination is most likely to lead to dishonesty and corruption,” the ZDI report points out. “In the past months the government has been dealing with faked COVID-19 testing certificates. This was evidence that mandatory politics do not work in Zimbabwe and the same might be done with vaccination cards.”