Amid violent attempts by Zanu PF to disrupt campaigning by opposition leader Nelson Chamisa, there are growing demands for real freedom of expression in Zimbabwe. The American Bar Association Centre for Human Rights accused President Mnangagwa of ‘abusing the criminal justice system to persecute government critics’ and called for the repeal of repressive laws. 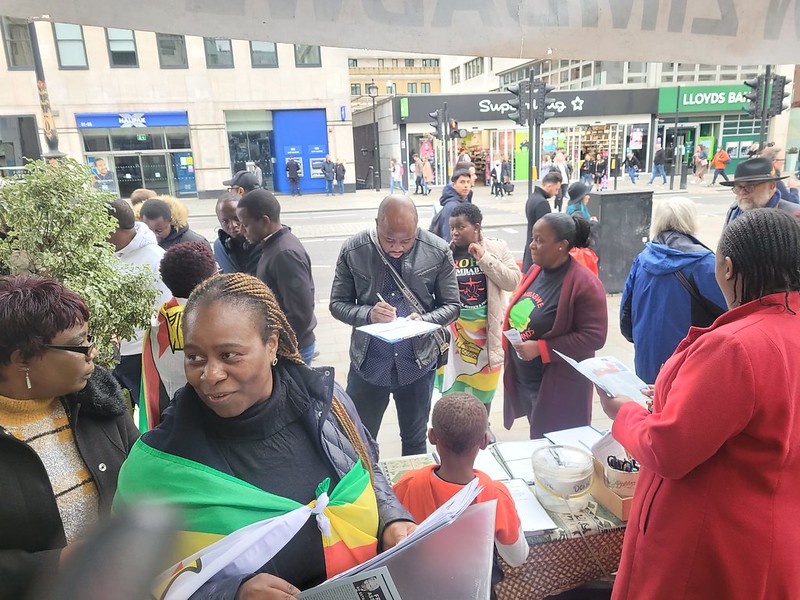 It urged the government to drop charges against the prominent journalist Hopewell Chin’ono and generally stop prosecuting human rights defenders, in line with the constitutional provisions for freedom of expression and association. Chin’ono has received numerous threats from suspected state agents and been arrested and jailed many times. He is currently facing three separate criminal proceedings (see: https://www.zimbabwesituation.com/news/stop-persecuting-journos-activists-ed-told/).

Human Rights Watch says an outspoken street preacher and critic of the government, Apostle Talent Chiwenga, has fled his home because of increased surveillance by people in unmarked vehicles. He said he believed the authorities wanted to kill him for his activities.

Chiwenga has campaigned in street sermons in Harare and on social media against human rights abuses and last year Home Affairs Minister Kasembe Kasembe accused him of being part of an ‘illegal and subversive bandwagon under the control of certain diplomatic missions’ (see: https://www.zimbabwesituation.com/news/critic-of-zimbabwes-government-fears-for-his-life/).

The question of freedom of expression in Zimbabwe was discussed by Zimbabwean author and filmmaker Tsitsi Dangarembga, who has now been honoured by the German Book Trade with its Peace Prize. In an interview with the German media company Deutsche Welle, she said every day in Zimbabwe it is such a grind to find the basis for survival that this itself limits freedom of expression (see: https://www.dw.com/en/tsitsi-dangarembga-there-is-no-freedom-of-expression-in-zimbabwe/a-59423526).

The Zimbabwe Election Support Network says the electoral environment has already been rigged in favour of Zanu PF ahead of the 2023 elections. Its monitoring and observation manager, Ian Goredema, said Zimbabwe had reverted to politically motivated violence. In a reference to the troubled tour by Chamisa he said there were tell-tale signs that 2023 would see a very different election.

‘You can clearly see that the space for the opposition to be able to connect with their own base is already being shut using Covid-19 regulations, where you see Zanu PF is the only party allowed to hold meetings and rallies. We saw many videos of legislators meeting huge crowds at a time when people were being restricted to 50 persons at a gathering yet they were in the hundreds.’ (See: https://allafrica.com/stories/202110200439.html.)

The MDC Alliance Vice President Tendai Biti called on the international community to examine the recent attacks on the party’s supporters and Chamisa, claiming that there was a plot to assassinate the party’s leaders. ‘I want to send a message to the international community in particular SADC that Zimbabwe is burning’. He said the only thing that could create a soft landing was a genuine dialogue between the MDC and Zanu PF.

Biti said no one was safe from attacks by security forces and Zanu PF agents. ‘There are massive attacks on the people of Zimbabwe . . . As I am talking to you right now Makomborero Haruzivishe has been languishing at Chikurubi Maximum prison for months. Vendors, activists, no-one is safe but it’s not just physical violent attacks, it’s also economic attacks. As I am talking to you right now the parallel exchange rate is almost 200 to the US dollar and there is no question before the end of November 2021 it would have reached 400.’ (See: https://www.thezimbabwean.co/2021/10/mdc-alliances-tendai-biti-calls-for-sadc-mediation-in-zimbabwe/.)

For the record: 18 signed the register.