Zimbabweans certainly made a mark at the world climate change conference in Glasgow. Not President ‘crocodile’ Mnangagwa, who kept his teeth below the surface: it was his supporters and opponents who made the news. 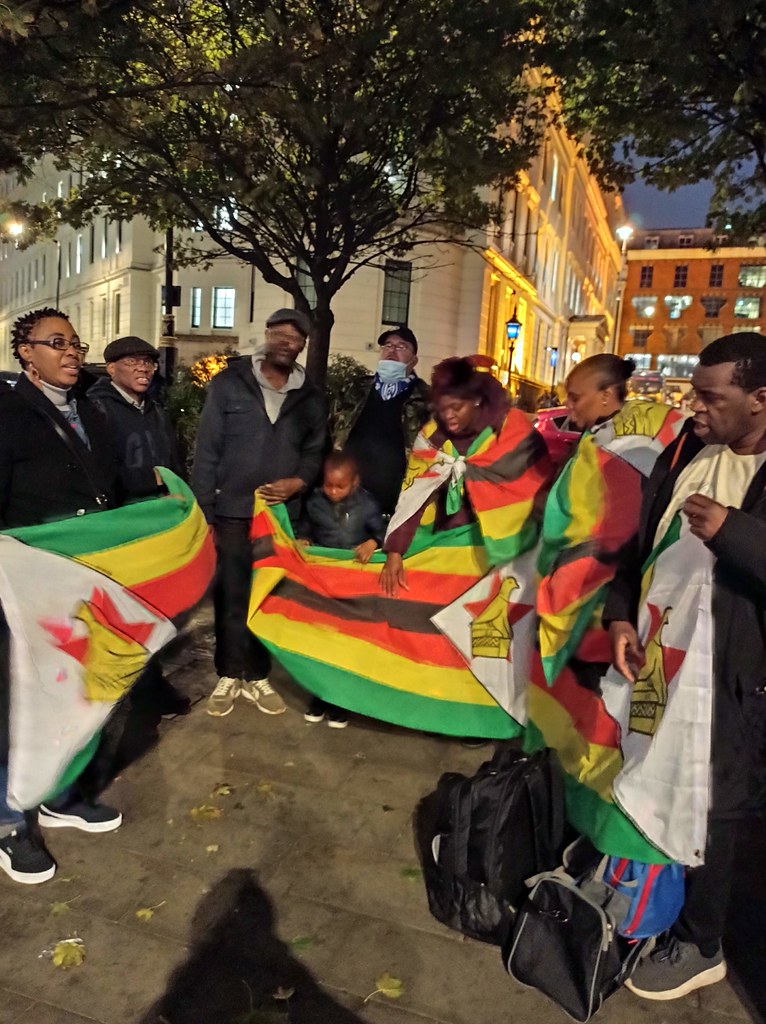 The Times newspaper observed: ‘While Boris Johnson struck a sombre note at the beginning of Cop26, saying the world is “one minute to midnight”, the Zimbabwean visitors to the conference were having a jollier time.’

The Times noted that the Zimbabwe government’s spokesman, Nick Mangwana, had posted a photograph on Twitter of two men buying trolley loads of supplies for a party to welcome Mnangagwa. They included 15 bottles of scotch as well as wine and beer etc.

Mangwana tweeted: ‘Tonight [Sunday] there is a massive welcome party held in honour of President Emmerson Mnangagwa. Glasgow is the place to be as Zimbabweans from all corners of the UK attend this shindig and welcome the president.’

The scene was described as ‘extremely embarrassing’ by Zimbabwean environmentalist Jessie Pineau. Pedzisai Ruhanya, former news editor of the Daily News, tweeted: ‘While millions wallow in a sea of poverty in Zimbabwe, varakashi [a slang term for the president’s supporters] enjoy whisky in Scotland. Rest assured they will be drunk and won’t know anything happening at the conference: it’s a boozing trip.’  (See: http://www.zimvigil.co.uk/vigil-news/campaign-news/1179-zimbabwes-boozy-cop26-party-doesnt-go-down-well-at-home.)

The Vigil used to come across Mangwana when he led Zanu PF in the UK. Sadly there have always been some Zanu PF supporters who deceitfully gained asylum in the UK on the grounds of Zanu PF misgovernance. But the majority of Zimbabweans here know the realities of life in Zanu PF Zimbabwe and they were in Glasgow to protest at Mnangagwa’s presence. Zanu PF might have guzzled the whisky but many Zimbabweans gathered outside the venue cold and sober to protest against Mnangagwa’s disregard for human rights and failure to deal with rampant corruption.

While Zambia’s new president Hakainde Hichilema arrived humbly on a commercial flight with a small delegation Mnangagwa hired a private plane from faraway Azerbaijan at a reported cost of US$415,000 for a one way trip from Harare to Glasgow. It appears that he feared that if he came on an Air Zimbabwe Boeing it might be impounded over debts (see: https://inews.co.uk/news/world/cop26-zimbabwe-president-uk-arrival-private-jet-supporters-celebrate-alcohol-1279965).

The trip would have been worth the money had it produced a good result but it appears that – contrary to the exalted reports in the Herald – there was no significant outcome.
Mnangagwa briefly met his host Boris Johnson as well as the UK’s heir apparent to the throne Prince Charles and his son William. Others included the UN Security Council Director-General Antonio Guterres and the European Council President Charles Mitchel.

His biggest fish was US President President Joe Biden. Mnangagwa excitedly said that Biden’s attitude to Zimbabwe was totally different from that of the US Embassy in Harare. The Vigil suspects Biden was merely being courteous. US policy on Zimbabwe is unlikely to change unless reforms are made by Harare (see: https://www.herald.co.zw/conduct-of-us-embassy-shocks-president/).

As for Mnangagwa’s big moment – his address at the summit – it fell flat as the auditorium was almost empty. To be fair we must explain that his slot was in the morning when most delegates, like Mnangagwa’s supporters, were sleeping off their hangovers (see: https://www.newsday.co.zw/2021/11/empty-chairs-as-ed-addresses-cop26/).