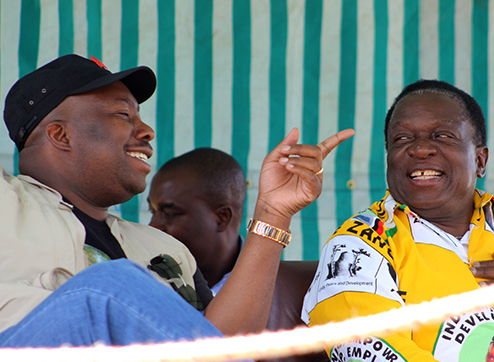 Mnangagwa’s hounds have reportedly launched a witch-hunt in the ruling party with some officials now being targeted for allegedly backing Tyson’s plot.

Kasukuwere, who was known as Tyson during his heydays in ZANU PF, was singled out by the ruling party in an opposing affidavit in the case where a party member Sybeth Musengezi wants Mnangagwa’s ascendancy after the 2017 coup declared illegal.

ZANU PF claims Musengezi was planted by Kasukuwere as part of factional wars in the party.

Tafadzwa Mugwadi, the ZANU PF director of information, alleged that some party officials are pretending to be loyal to Mnangagwa yet they are working with Kasukuwere. Said Mugwadi:

I exposed that and I wouldn’t want to speak much, but what should be known is that the hallmark of ZANU PF when going for elections, it sheds off the jetsam and flotsam and anything that is meant to cause commotion and confusion and works on the basis of the willing and devout patriots.

ZANU PF has a way of exposing such in dealing with errant elements.

What we know is they have been up to attacking government officials, government departments, and senior leadership and of course there was suspicion and that suspicion has been confirmed by what they are doing.

This will not derail our plans ahead of 2023 and if you look at the numbers, there are just three or four elements causing confusion.

Anyone can post anything on social media and cannot be stopped but I doubt if the people you refer to are genuine party cadres.

Anyone can post anything on social media and cannot be stopped but I doubt if the people you refer to are genuine party cadres.

Recently, one of Mnangagwa’s loyalists, Never Maswerasei recently apologised for supporting the President.

Maswerasei is now campaigning for Kasukuwere on social media.

Meanwhile, Kasukuwere has remained mum about his presidential ambitions, but his backers say his campaign is taking shape behind the scenes.