Zimbabwe’s opposition Movement for Democratic Change (MDC) Alliance led by Douglas Mwonzora was dumped by some prospective contestants in the last minute at the Nomination Court on Wednesday in Chinhoyi, Mashonaland West, resulting in the party fielding only two candidates instead of six to fill vacant seats in the forthcoming March by-elections. 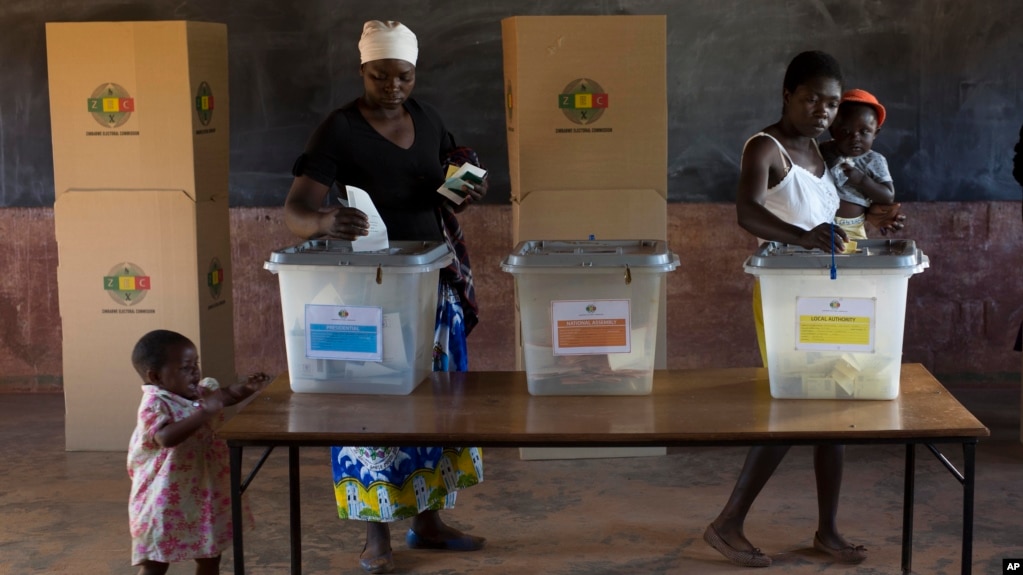 FILE: Zimbabweans vote at the Sherwood Primary School in Kwekwe, Zimbabwe, Monday July 30, 2018. The vote will be a first for the southern African nation following a military takeover and the ousting of former longterm leader Robert Mugabe. (AP Photo/Jerome Delay)

Senior MDC-T member and MDC Alliance Ward 2 aspiring candidate, Willie Nyambe, said they were let down by some colleagues, who dumped them at the Nomination Court.

“We failed to field (candidates) in other wards because we were tricked by some members who pretended to be ours but dumped us at the last minute claiming to belong to the Citizens Coalition for Change,” said Nyambe.

Party spokesperson, Witness Dube, said when some members deserted the MDC-T at the last minute, those who replaced them failed to get enough nominators on time to register at the Nomination Court.

“Yes, we failed to field candidates in some areas because there was confusion on the selection of candidates. Some members who purported to be ours deliberately failed to submit nomination papers,” said Dube.

A large number of council and parliamentary seats fell vacant following the recall of some councilors and lawmakers by the MDC-T, which claimed that they had aligned themselves with the MDC formation led by Nelson Chamisa. Other lawmakers died while they were in office.

The MDC-T now has two factions led by Mwonzora and Thokozani Khupe, who claimed last Friday that she had expelled the party president for declaring that he is also the leader of the MDC Alliance.

Meanwhile, the Zimbabwe Electoral Commission (ZEC) has warned that stern measures will be taken against Zimbabweans who violate the country’s election code of conduct during campaigns in the run-up to the March by-elections.

Speaking soon after announcing candidates nominated to contest the forthcoming by-elections, Makonde district elections officer, who was only identified as Kawocha, said it’s high ZEC should punish people for violent behavior during elections.

“All along we have been trying to make political parties commit to each other that they will behave in a peaceful manner during campaigns and after voting but they disregarded the code. It’s high time ZEC exercises power to discipline those who violate the code of conduct by disqualifying them,” said Kawocha.

He also said candidates should put posters on designated places and elsewhere with the consent of property owners.

“Lets campaign in peace, let us have tolerance and respect posters of other candidates and not to put posters on buildings without the owners’ consent,” said Kawocha.