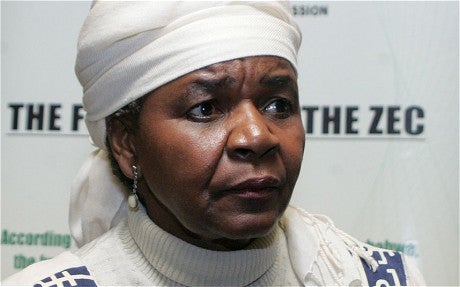 The Zimbabwe Electoral Commission wishes to acknowledge and recognise the years of sterling service Commissioner Joyce Laetitia Kazembe has provided to this country throughout her career.

Currently, she is the most senior in terms of experience having served for a period spanning in excess of 20 years.

Commissioner Kazembe joined the Zimbabwe Electoral Commission in 2007 and served her term of office under the then Constitution of Zimbabwe.

She was again appointed for a fresh term under the new Constitution following the promulgation of the Constitution of Zimbabwe Amendment No. 20, which became operational after the 2013 referendum.

She was reappointed for a further two terms, of which the second term under the 2013 Constitution is terminating in July 2022.

Prior to joining the Zimbabwe Electoral Commission, Commissioner Kazembe had performed national service with the then Electoral Supervisory Commission which she joined in 2000.

The Electoral Supervisory Commission is the predecessor to the Zimbabwe Electoral Commission whose mandate was to supervise all elections in Zimbabwe which were being conducted then by the Registrar General’s Office.

Commissioner JL Kazembe possesses vast experience in the conduct and management of elections and is well known for her service both in the region and the international sphere.

The Commission appreciates and wishes to thank her for the unwavering dedication and quality service she has provided to the Commission during her term of service.

The Commission wishes to tap in from her experience in dealing with public relations and media issues prior to her departure.

Pursuant to that objective, the Commission has appointed Commission Jasper Mangwana to take over the role of the Spokesperson for the Commission with effect from Friday 18th March 2022 before Commissioner JL Kazembe’s term of office expires.

This will allow a smooth handover-takeover process and enable the Commissioner to inherit this portfolio to draw good lessons on handling it while the outgoing Commissioner is still in service.

It is also our hope that Commissioner JL Kazembe will do her best in passing all the knowledge and expertise at her disposal to the next generation of Commissioners and staff.

In recognition of her outstanding contribution to the mandate of the Commission and the development of electoral processes in Zimbabwe, the Commission is mooting the establishment of a Zimbabwe Electoral Commission Elders Panel comprising personnel who have served it before.

The Panel will be responsible for providing guidance and advice to the Commission during critical electoral processes.

It is envisaged that the panel of elders will operate as a charitable trust wherein they donate their institutional memory by training, dispute resolution, recommendations on international best practices, technology and ethical practices in elections and, championing youth participation and role of women and PWDs in elections and electoral processes.

It is also proposed that Commissioner JL Kazembe be designated as the Honorary Chairperson of the panel when the panel comes to fruition.

The Zimbabwe Electoral Commission wishes her all the best in the remaining term and her future endeavours.