Crisis in Zimbabwe Coalition condemns in the strongest of terms, the continued violent disruptions of hearings for the Private Voluntary Organisations (PVO) Amendment Bill by alleged Zanu PF activists. 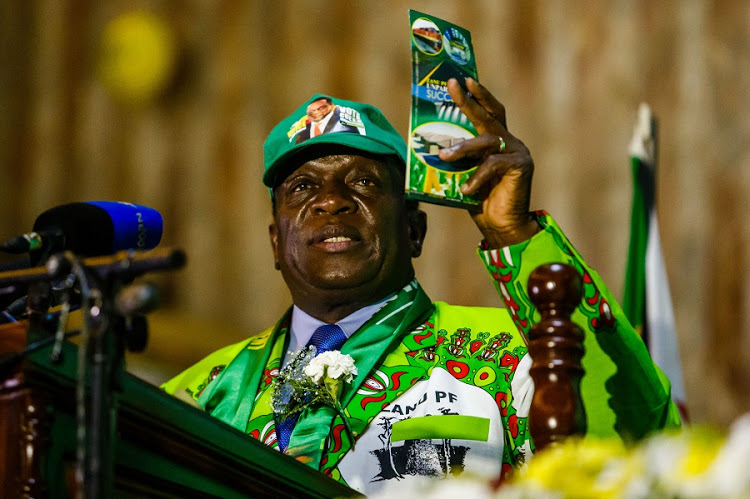 FILE PICTURE: President Emmerson Mnangagwa lifts the manifesto booklet during the launch of the Zanu PF election Manifesto ahead of 2018 harmonised general elections in Zimbabwe May 4 2018.

We note with great concern that Zanu PF continues to use violence and intimidation to ensure they dominate proceedings during the hearings in an attempt to push for amendments to the Private Voluntary Organisations (PVO) Act.
On March 1, 2022 a member of the Crisis in Zimbabwe Coalition and Masvingo Centre for Research and Advocacy (MACRAD) Director, Ephraim Mtombeni was attacked by alleged Zanu PF activists who were targeting citizens opposing amendments to the PVO Act.
The attack on Mtombeni followed similar incidents of violence in Highfield and Rusape on February 28, 2022 during the PVO Amendment Bill public hearings.
We deplore the fact that Zanu PF has resorted to the use of violence to silence citizens, especially those opposed to amendments to the PVO Act.
We reiterate that amendments to the PVO Act are meant to further close the democratic space and entrench authoritarian rule in Zimbabwe.
We call upon citizens to remain steadfast in opposing any form of draconian legislation. We are guided by the virtues of the liberation struggle and the new constitution: freedom of expression and association.
We further implore the ruling party, Zanu PF to exercise tolerance of divergent views and refrain from violence.
Post published in: Featured