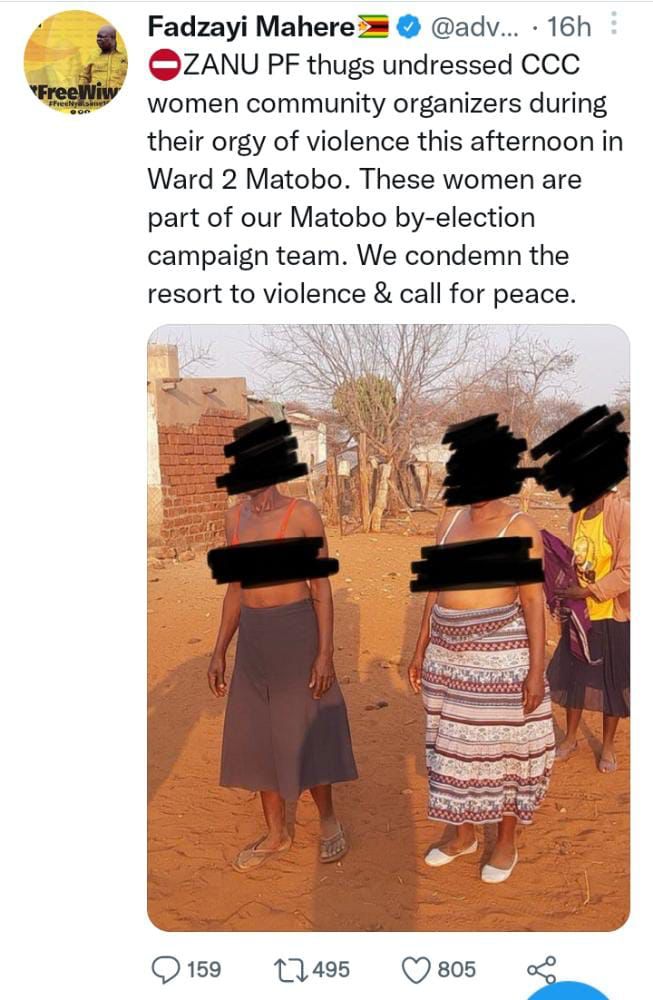 On Sunday 16 October 2022, several CCC party supporters sustained
injuries after they were assaulted and roughed up by some ZANU PF
party supporters who they encountered while preparing for a local
authority by-election for Ward 2 in Matobo in Matabeleland South
province scheduled for 22 October 2022.

Some women were indecently abused, as they were forced to undress, by
the ZANU PF party supporters.  Several vehicles and houses were also
damaged while some goods were reported to have been looted at a local
shop and at a homestead.

ZLHR condemns this unacceptable, violent, inhuman, dehumanising and
degrading treatment of people, which has no place in a civilised
society.

The deplorable acts of violence by supporters of ZANU PF party are
extremely concerning considering that they are happening ahead of
general elections scheduled for 2023.

Violence has no place in an aspiring democracy and is a monumental
threat to the peaceful co-existence of all Zimbabwean citizens and
such acts by some misguided political party supporters threaten
Zimbabwe’s democratic trajectory.

Tolerance towards people who hold differing political views and utmost
respect for fundamental rights and freedoms of everyone by all members
of society is key to achieving a thriving democracy.

The acts of violence perpetrated by ZANU PF party supporters on CCC
party members contravene these constitutional provisions and are a
malicious disregard for fundamental rights and freedoms such as the
right to life, the right to human dignity, the right to personal
security, freedom of assembly and association and political rights.

In recent months and weeks, ZLHR has also noted rising incidents of
political violence across the country where opposition political party
supporters have been subjected to wanton violence.

This onslaught bears all the hallmarks of a pre-meditated attack,
which is aimed at intimidating political contestants and their
supporters and block them from accessing potential voters and
constituents.

The actions of ZANU PF party supporters fly in the face of contents of
a report released during the United Nations Human Rights Council’s
50th session by Clément Nyaletsossi Voule, the Special Rapporteur on
the Rights to Freedom of Peaceful Assembly and of Association, who
raised concerns about the violation and curtailment of freedoms of
association, peaceful assembly and expression and asked government to
take measures consistent with his recommendations produced through his
country visit to Zimbabwe.

Sadly, the perpetration of violence by some ZANU PF supporters comes
some few days after Zimbabwe recently joined the world to commemorate
the International Day of Non-Violence, which is a global observance
that promotes non-violence.

The unprecedented levels of polarisation can only be addressed when
there is political will from leaders of offending political parties,
who must preach tolerance, diversity of political beliefs and thought
and decisively dissuade their supporters from resorting to barbaric
and stone-age tactics of settling perceived political differences.

To stem the culture of violence, ZLHR calls upon;

•    ZANU PF party supporters to shun political violence and all forms of
intolerance towards members of different political parties;

•    Leaders and members of ZANU PF party to condemn and desist from all
violent activities and to inculcate a culture of tolerance and
non-violence in settling disputes;

•    Zimbabwe Republic Police to urgently and thoroughly investigate the
acts of violence that took place in Matobo and all other incidences of
political violence across the country and bring perpetrators of
violence to account irrespective of their political party affiliation.