DOCTORS based at Parirenyatwa Group of Hospitals have demanded a meeting over the deteriorating conditions at the hospital which they say are leading to patients dying from preventable illnesses. 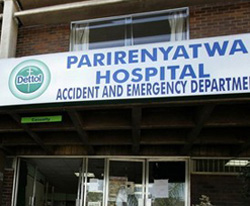 The doctors said the hospital had no basic medicines, even for primary care, while the situation was worse for patients needing life-saving and emergency surgery, a state officials said was reflective of the situation in major hospitals across the country.

In a letter addressed to the hospital’s chief executive officer Ernest Manyawu and copied to the clinical director, the Zimbabwe Hospital Doctors Association demanded an urgent meeting to discuss the deteriorating situation at the institution.

In an interview, Parirenyatwa spokesperson Linos Dhire last night confirmed to NewsDay that authorities had received the letter.

“I can confirm that we have received the letter and authorities are meeting the doctors tomorrow to discuss the issues,” he said.

In their letter, the doctors said for the past year, the conditions at the hospital were compromising the lives of patients and leading to avertable loss of life.

“As healthcare practitioners, we spent innumerable years in school training to serve our people,” the doctors said.

“However, the critical lack of consumables in our hospital is rendering us ineffective as we can no longer deliver services required at the tertiary hospital.”

They also noted some issues affecting their work, including lack of sundries, broken down equipment at the laboratories and theatres, among others.

“We often run out of and lack basic sundries which should be available even at primary institutions. To mention a few, there have been shortages or lack of yellow cannulas, 5ml and 10ml syringes, sterile gloves, betadine, cotton wool strapping, catheters and urine bags,” the doctors said.

“Our U&E machine (urea and electrolytes) is always down, the most common being no reagents, sometimes no water or it’s a mechanical issue.”

The doctors said as a central and teaching institution, they expected to be conducting more tests in the laboratory.

They said the main theatre was only handling emergency cases.

“Those who do manage to go to the theatre are supposed to buy sutures, primapore, antibiotics, catheters and sometimes urine bags,” they said.

The hospital, the doctors said, was leaking from everywhere, especially the “A” floor and biochemistry side of the institution and some areas had no adequate lighting.

“Our infrastructure is old and needs serious repair. CT (computerised tomography) scan has been down for years now. X-Ray machines sometimes are down and one or two are working at any given time,” they said.

“Ultrasound scan (USS) patients are being booked to a date one or more months later and interns have to negotiate if it’s urgent. Radiotherapy machine is, either, almost always down and is down at the moment.”

The doctors said the hospital had weekly water supply issues. They also said they were losing their belongings at the doctors’ quarters.

“Trees are falling on residential windows and roofs are leaking. There is lack of urgency to attend to issues involving engineering departments despite sending requests.

“Some interns without residence find it hard when they are on call due to shortage of on-call rooms and some sleep in their cars,” they said.

An X-ray is now being charged at US$33, while ECHO and consultation have been increased to US$80 and US$15, respectively.

“Aren’t we raising our own funds to buy the basic things already mentioned which are in short supply or unavailable?”

Parirenyatwa is also a teaching institution for nurses and several other medical professionals and the doctors argued that it was difficult for them to work in the current environment at the hospital.