Protests in Harare started on Tuesday, 31st of July after the parliamentary results were announced. During the 1st of August 2018, the clashes in Harare descended into chaos in response to the announcement of the Zanu-PF parliamentary majority victory. By then international media reported that three people were killed after troops opened fire.

During the 1st of August 2018, we monitored and recorded how Zimbabwe Electoral Commission (ZEC) website was defaced. The defacement was widely reported in the local media and social media.

Minutes after the website administrators using a functionality of the control panel took the content of the website offline.  The link /cgi-sys/suspendedpage.cgi is common from Cpanel Control Panel 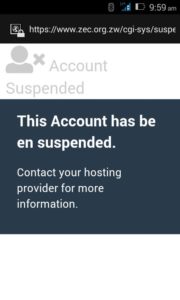 At a press briefing on Thursday, 2nd of August 2018 the ZEC Commissioner Qhubani Moyo said they were forced to temporarily stop the site (…) because hackers started uploading “pictures” which the poll management authority did not know about and that they could not disclose what sort of information had been posted. Moyo also stated that the website security was improved after the attack.

As far as we know, all the media coverage of this security event has been re-using one single screenshot of the defacement and such capture does not include the full content of the homepage. 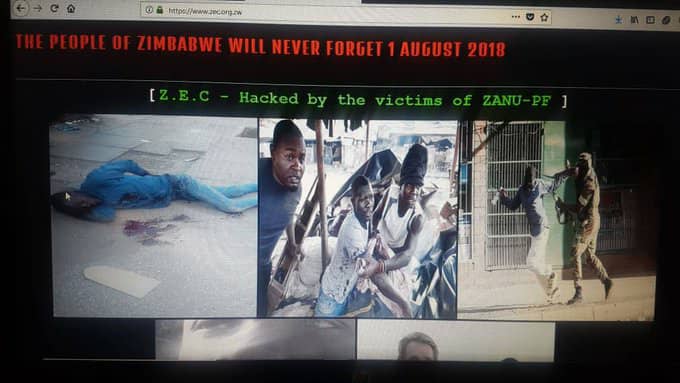 Although Qhubani Moyo claimed that the website was cleaned and recovered quickly, by the 3rd of August 2018, we could still verify that the defacement remained hosted in the website with the name “indexhacked.php“.

The page included images that were uploaded to the platform twimg.com. 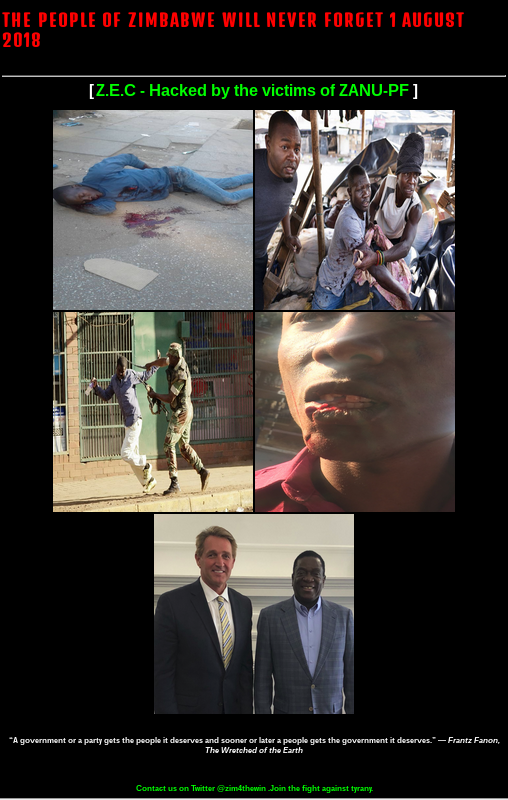 Pictures of the defacement includes a picture of Emmerson Mnangagwa and Jeff Flake https://twitter.com/JeffFlake who made statements of how good were the elections ignoring the 1st Aug events.

Yesterday some hackers attacked our website and posted some pictures that were not from Zec. At exactly 11 minutes from the development, we decided to pull down the website so that we avoid spreading false hoods that were being spread by hackers on the Zec website. We are working on reconstructing it and this time it will be more secure. I don’t know why they did it and I will not get deeper into how we will secure it and it is safer to say it will be up soon. Our technical teams are seized with the matter and they are investigating so we find out what really happened. We’ll also trace where the hackers originate from so we catch the political criminal elements.

It is obvious that the defacer left enough hints to attribute the attack and the motivations.

zim4thewin aka xⒶzy is a digital activist active in Africa that claimed the denial of service attacks against the South African SABC back in 2016 to ban the filming of violent protests. 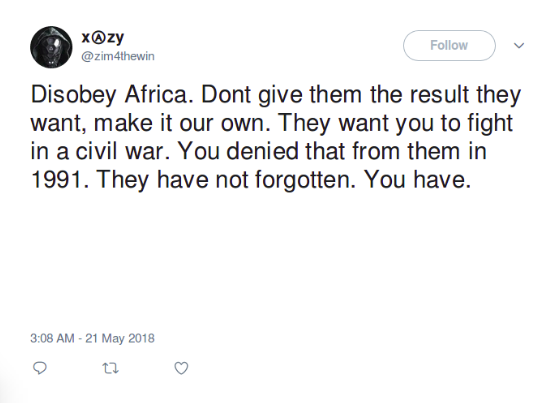 Who is Team Pachedu?

The defacer included a reference to “Team Pachedu“, a civil society interdisciplinary team that has raised concerns about the 2018 voters’ roll, with sufficient evidence of human manipulation. Their reports are available at the site http://www.teampachedu.org and https://thiscitizen.org/

It is unclear what connection @win4thewin has with the Team Pachedu but it is likely that the defacer is just endorsing their work rather than being a formal member.

As a result of the experience we have gained auditing websites, we have developed several in-house techniques to identify the presence of stealth backdoors.
Just a few hours after the defacement, we found the presence of a backdoor inside the unprotected area of the admin area.
The backdoor seems to make use of  the data send in the Website referer HTTP_REFERER and Accepted Language Header (HTTP_ACCEPT_LANGUAGE) to initialize an interactive session. When we saw that behavior we thought immediately in “Weevely”, a PHP backdoor that is part of Kali Linux.

A detailed analysis of the backdoor is here and here

More info of Weevely and Kali Linux is documented here

This is what we know of the ZEC website and why we believe the website does not meet basic security standards. 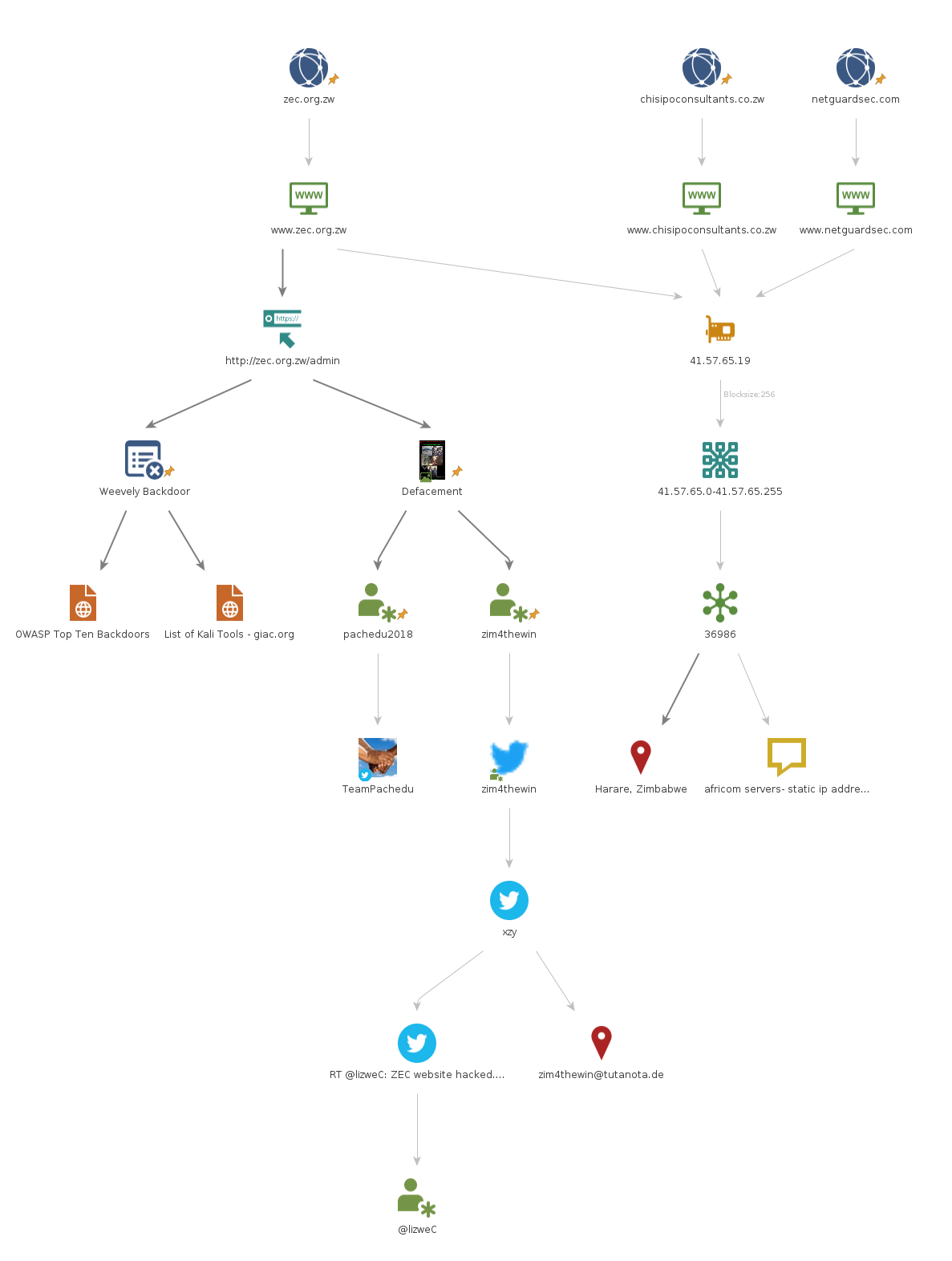 [July 24, 2018] Mail & Guardian, Even before the vote, Zimbabwe’s election is not credible

[July 19, 2018] Sunday Times, The Elders descend on Zimbabwe ahead of crucial elections

How did we know that weevely was used by the attacker?

In order to keep control of the server, zim4thewin left a copy of weevely backdoor in the server.

Without entering into much technical details about the webshell obfuscation technique, the webshell relies on messages exchange between the attacker and the webserver side that are transmitted using the HTTP_REFERER and HTTP_ACCEPT_LANGUAGE HTTP headers.

An carefully analysis of Weevely server side code reveals that independently of knowing the “credentials” to access the backdoor, a cookie (session)  starts when the HTTP_REFERER and HTTP_ACCEPT_LANGUAGE are sent.

Looking for index pages that return cookies under these conditions reveal the possible presence of the backdoor.

If you are interested to know more about weevely webshell, you can watch this very good presentation here for more details.