HARARE Provincial Magistrate Vakayi Douglas Chikwekwe ran amok Tuesday and bashed one of his subordinates whom he left nursing a stab wound on his left eye. 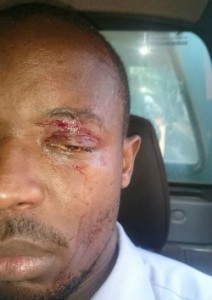 Rare Saidi, a court recorder, now working under the Clerk of Court at Rotten Row magistrateâ€™s court, had infuriated his short-fused boss who found him in a room the latter had barred staff from using.

Chikwekwe, it is said, took occasion to rain a few fist blows on his less fortunate junior before stabbing him on top of his eye with the tip of a ballpoint pen.

Saidi later filed assault charges against his violent boss at Harare Central police and was referred to Parirenyatwa Hospital for treatment.

Reached for comment Wednesday morning, Saidi asked to be excused for a few moments as he was busy consulting with his other bosses.

â€œRight now I am in my bossâ€™ office, please call me a bit later,â€ he said.

Efforts to reach him an hour later were fruitless as his mobile was no longer reachable.

However, speaking on condition of anonymity, court staff said Chikwekwe meted out the most unorthodox punishment on his junior for going against his orders to keep away from the forbidden room.

â€œJust want such bad behaviour to be exposed,â€ read a message, circulated within the group.

â€œ…this is someone I know who works the courts (sic) who got his eye injured by his boss Vakayi Douglas Chikwekwe Harare Provincial Magistrate.

â€œThe boss is very abusive to the workers Honaiwo zvaitwa naboss vangu (see what my boss did to him).

Chikwekwe, on his part, declined to comment on the matter, instead referring this reporter to the Chief Magistrate Mishford Guvamombe.

â€œI donâ€™t give any comment over the phone,â€ he said, â€œEverything goes through the Chief Magistrateâ€™s office and the JSC (Judicial Service Commission). I refer you to the office of the chief magistrate.â€

Guvamombe confirmed the scuffle saying investigations were in progress.

â€œWe have heard about it but we are still to find out what happened exactly. We donâ€™t have the facts yet as you know it happened late yesterday,â€ Guvamombe said.

â€œUnfortunately, the complainant is being attended to at Parirenyatwa; so until he leaves that place, then we hear his version and we can take a position. The long and short of it is that we are carrying out investigations.â€

Chikwekwe is loathed by his juniors for his explosive behaviour.

A staff member who spoke to NewZimbabwe.com said their boss is used to bursting into offices and yelling at his juniors for all sorts of alleged offences.

Morale, said the staff member, has plummeted under him.

There were fears Chikwekwe may try to influence the dropping of the charges by his junior.

But Guvamombe was quick to allay the fears, saying the matter shall be handled professionally.

â€œWe do not operate like that. We will be fair with both parties and due process would be followed. We will do all what is necessary to find out the truth,â€ Guvamombe said.